(TibetanReview.net, Aug01’20) – The Covid-19 pandemic that China unleashed globally towards the end of last year before turning its attention to ending its spread within the country had a devastating effect not only on the health but also the economic situation in countries across the world. The US economy, for example, shrank by 33 percent in the first half of this year compared to the same period last year, Germany’s by 35%, France’s by 19%, Spain’s by 22.1%, and the Eurozone’s as a whole by 15%, reported hindustantimes.com Aug 1.

These represented the sharpest fall for the USA in 70 years while the size of Spain’s economy, for example, is where it was in 2002, the report noted.

The number of people infected by the pandemic across the world is now more than 17.6 million while the death toll stands at over 679,000.

This is the fourth consecutive day the number of cases in India increased by more than 50,000.

Cases in July were nearly 2.8 times the number recorded in the previous month, which had around .4 million cases. Likewise, fatalities in July were 1.6 times higher than the deaths recorded in June (11,988). And as the pandemic continued to surge, the second half of July saw around .73 million new infections, nearly twice the number reported in the first half, noted timesofindia.com Aug 1.

Besides being the country with the third highest total number of infections, standing behind the USA and Brazil, and India has the fifth highest number of deaths from the pandemic. Only the USA, Brazil, the UK, and Mexico have reported more deaths than India.

Finally, there were four other states/ Union Territories with less than 1,000 cases each, namely Meghalaya, Sikkim, Mizoram, and Andaman and Nicobar Islands.

Only Lakshadweep does not have any covid-19 case. 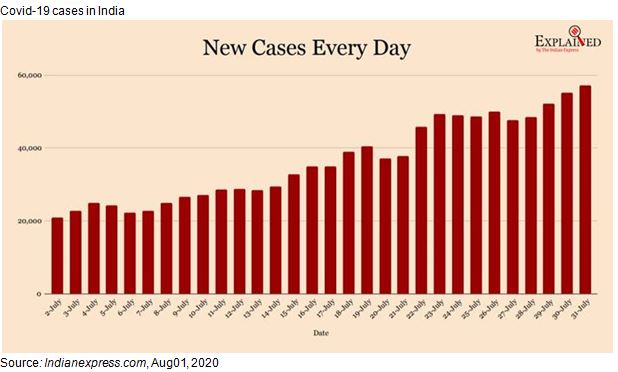 India’s Minister of state from Home Affairs G Kishan Reddy has on Aug 1 called on all states to emulate the “Delhi model” for controlling the spread of the coronavirus.

“The more number of the tests, the faster the containment of the disease. You know, Delhi as a union territory I am personally monitoring. There is 84 per cent recovery rate in Delhi. All the states should emulate the Delhi model,” the PTI news agency Aug 1 cited the minister s telling reporters.

The occupancy of beds reserved for Covid patients in Delhi’s hospitals was 20%, with only 2,932 of the 14,303 beds being occupied. Even the ventilator beds that were high in demand till last month, were mostly vacant. According to data shared by the hospitals on the Delhi Corona app on Friday (Jul 31), of the 1,218 Covid beds with ventilator support, 404 were occupied and remaining 814 were lying vacant, reported timesofindia.com Aug 1.

Delhi is still the state with the 12th highest number of active cases, but its daily recovered cases have continued to be higher than new infections over many weeks, unlike almost all other cases. On Aug 1 morning, Delhi reported 1206 recoveries as against 1195 new infections.

Among Tibetans in India and Nepal, there has been a total of 71 infections so far, of whom six were active, 63 had recovered and two had died, according to the tally of the Central Tibetan Administration as of Aug 1.