(TibetanReview.net, May16’19) – The Dalai Lama has not talked about it before but had praised Chinese President Xi Jinping for being “more open minded” than his predecessor Hu Jintao. Now in a new book by an Indian journalist, the exile spiritual leader of Tibet has revealed that Xi had agreed to a request for a meeting with him during the former’s visit to India in 2014. However, India felt differently and the meeting did not happen.

“In 2014, when Chinese President Xi Jinping visited Delhi for talks with Prime Minister (Narendra) Modi, I requested a meeting with him. President Xi Jinping agreed, but the Indian government was cautious about the meeting, so it didn’t happen,” Sonia Singh has quoted the Dalai Lama as saying in her book ‘Defining India: Through Their Eyes’. 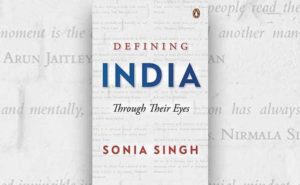 It was not clear in what exact terms India had expressed its caution and ensured the meeting did not take place.

But the Dalai Lama has not expressed any regret that the meeting did not take place. Rather, he has expressed appreciation for Mr Modi’s concern about maintaining good relations with China and the good rapport that he enjoyed with the Indian leader.

“(N)aturally Prime Minister Modi is concerned about good relations with China. I actually know him very well. When he was the chief minister of Gujarat, the state found an ancient Buddhist monastery and as chief minister, Mr Modi invited me to a function for this. Besides the official meeting, he also came to see me at my hotel. We have very good relations. He is quite an active Indian prime minister, continuously visiting many countries. That, I admire at his age.”

But Sonia Singh feels that the meeting, if it had taken place, could have been historic. “Just like the historic moment between the heads of North Korea and South Korea in 2018, this could have been a meeting that had the promise to change the course of China-Tibet relations, especially as there have been reports that there are informal contacts between both sides.”

However, the book’s author also feels that “a meeting between the Dalai Lama and President Xi could have also been used as a propaganda tool by the Chinese to outwit both India and the Dalai Lama, who is seen by some foreign policy strategists as India’s trump card against the Chinese. It’s not surprising then that the request for the meeting must have sent the ministry of external affairs into a spin leading to a denial of the request.”

The author recalls that in a speech in Delhi in 2014, the Dalai Lama had said that President Xi was the first Chinese leader to publicly say that Buddhism had a role to play in the preservation of Chinese culture.

It is also worth noting that the South China Moring Post had reported Sep 19, 2014 that the Dalai Lama had, the day before, hailed Xi for being “more open-minded” as the president held talks with Mr Modi during a rare visit to India.

“Xi Jinping’s approach [is] more realistic, more open-minded” than that of his predecessor Hu, the report quoted him as saying in Mumbai.

Also the Wall Street Journal reported Sep 19, 2014, “noting further indication of thawing in the relationship between Beijing and the Dalai Lama,” that an anonymous Chinese blog post, illustrated with a photo of a serene looking Dalai Lama bowing with his hands pressed together, argued that allowing the spiritual leader to return home would reduce the ability of Western countries to assault China over the Tibet question while winning the confidence of Tibetans in and outside of the country and undermining extremists.

Tellingly, the blog post, which was taken down on Sep 18 night, was stated to be based on rumors of talks between the Dalai Lama and Beijing “that the Dalai Lama’s camp says are untrue”.

Columbia University Tibet specialist Robert Barnett was cited as saying at the time that he nevertheless saw the blogpost as significant, noting that it was left online long enough to rack up more than 50,000 views.

China’s mind game on Tibetans a flop, Dalai Lama to visiting US official on Tibet issues

Construction begun of a Dalai Lama library, learning centre in Ithaca, US