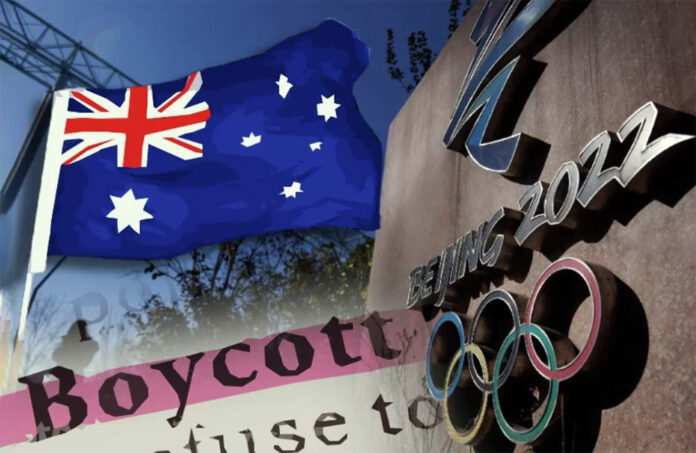 (TibetanReview.net, Dec08’21) – While China says it does not care and yet vows to retaliate, Australian has become the second country after the USA to announce a diplomatic boycott of Beijing Winter Olympics 2022, citing human rights concerns. The development raises the prospect of more countries in the democratic West following suit in the face of mounting parliamentary and civil society pressures.

Australian officials will not attend the Beijing Winter Olympics, in a formal boycott of the Games over China’s human rights abuses against Uyghur minorities in the country, reported the abc.net.au Dec 8.

The report cited Prime Minister Scott Morrison as saying Dec 8 that Australian athletes, as in the case of those from the US, would compete at the Games despite the diplomatic boycott.

“I’m doing it because it’s in Australia’s national interest,” he has said. “It’s the right thing to do.”

Mr Morrison has said Beijing’s own diplomatic freeze on Australia had also fed into the decision for officials to boycott the Games, because his country had been unable to raise its concerns about human rights directly with Chinese leaders.

Canberra’s decision comes amid “disagreement” with China over a slew of issues that have plunged relations into the most serious crisis since the Tiananmen Square crackdown in 1989, noted the hindustantimes.com Dec 8.

Like in the case of the USA, the Chinese Foreign Ministry maintained that it had not invited any Australian government officials to the Games “and no one cares whether they come or not.”

The public stunt by Australian politicians out of selfish political interests will have no impact on Beijing’s success in hosting the Winter Olympics, China’s trenchantly nationalist official globaltimes.cn Dec 8 cited Wang Wenbin, spokesperson for the Chinese Foreign Ministry, as saying at a press conference.

The report cited Chen Hong, a professor and director of the Australian Studies Centre, East China Normal University, as saying the Morrison government had gone too far on the anti-China road, and may have left no room for maneuvering.

Earlier, while responding to whether the US was trying to get other allies to join it the “diplomatic boycott,” White House Press Secretary Jen Psaki had told her Dec 6 press conference, “we have informed them of our decision, and obviously we will leave it to them to make their own decisions.”

Maybe two or three countries will follow the US but no more, globaltimes.cn Dec 8 cited Lü Xiang, a research fellow at the Chinese Academy of Social Sciences, as saying.