(TibetanReview.net, Oct08’20) – Thanks to the Covid-19 pandemic that broke out of the central Chinese city of Wuhan late last year, up to 150 million people across the world could get pushed into extreme poverty by the end of 2021, wiping out more than three years of progress in poverty reduction, the World Bank has said Oct 7.

Releasing its flagship biennial report on poverty and shared prosperity, the multilateral development lender has said that an additional 88 million to 115 million people will fall into extreme poverty – defined as living on less than $1.90 a day – in 2020. This could grow to 111 million to 150 million by the end of 2021, the timesofindia.com Oct 7 cited the report as saying.

The effect is expected to be acutely felt in India too where the World Bank expects that the country’s GDP will shrink by 9.6 per cent this fiscal year.

China, the world’s largest creditor, is increasingly coming under pressure to cancel its huge debet to Covid-19-hit poor countries under the Group of 20 Debt Service Suspension Initiative (DSSI). Making the call, World Bank president David Malpass has on Oct 5 accused China’s well capitalized official lenders of not fully participating in the DSSI, reported the timesofindia.com Oct 7.

Four states, namely Maharashtra, Andhra Pradesh, Karnataka, and Tamil Nadu have accumulated more than 630,000 cases each in that order.

Three other states/ Union Territories, namely Jharkhand, Jammu & Kashmir, and Uttarakhand had reported more than 52,000 cases each so far in that order. 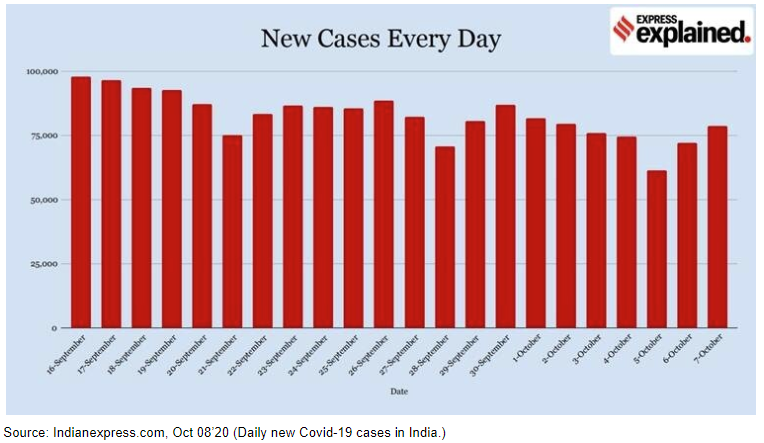 The total number of Covid-19 cases among Tibetans in India, Nepal and Bhutan had remained unchanged for the second day at 403 (↑0), of whom 175 were active, 214 had recovered and 14 (↑0) had died, according to the tally of the Central Tibetan Administration (CTA) as of Oct 08.