(TibetanReview.net, Nov02’20) – Fresh Covid-19 cases in India have continued to fall for the seventh straight week but with a lower rate of decline. A 12% drop in new cases was recorded in the week ending on Sunday (Nov 1), as opposed to a 16% decline in the previous week, noted the timesofindia.com Nov 2.

The report also said this was the first time in five weeks that the fall in cases was lower than that recorded in the preceding week, both in percentage and absolute terms. If the trend extends into subsequent weeks, the country could be seeing a flattening of the Covid-19 graph, which is currently falling sharply, it added.

This was also stated to be the sixth consecutive week of falling coronavirus-related deaths in India, with the current week’s toll, at 3,600, being a 56% fall from the peak.

The number of active cases remained below six lakh for the fourth consecutive day.

They were followed by six other states with more than 206,000 cases each and included Delhi, West Bengal, Odisha, Telangana, Bihar, and Assam in that order.

Seven other states, namely Rajasthan, Chattisgarh, Gujarat, Madhya Pradesh, Haryana, Punjab, and Jharkhand had reported more than 102,000 cases each so far in that order.

Two other states/ Union Territories, namely Jammu & Kashmir, and Uttarakhand had reported more than 62,000 cases each so far in that order.

Besides, there were seven other states/Union Territories with a total of more than 2,700 cases each, namely Meghalaya, Nagaland, Ladakh, Andaman and Nicobar Islands, Sikkim, Dadra and Nagar Haveli, and Mizoram in that order. 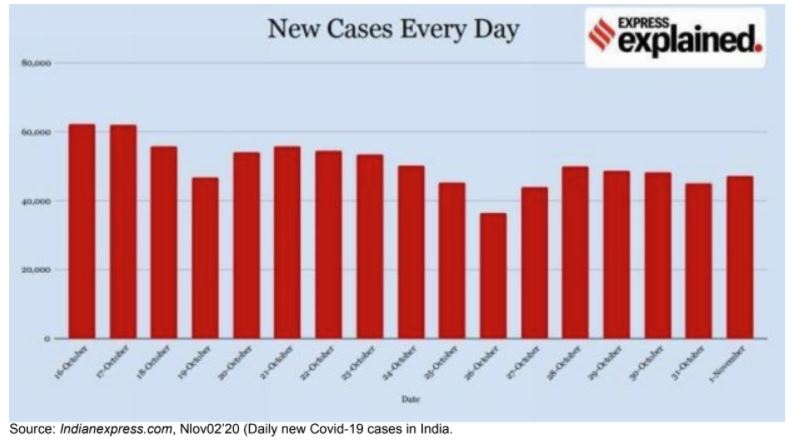 The total number of Covid-19 cases among Tibetans in India, Nepal and Bhutan was shown to be unchanged for the fifth day at 840 (↑0), of whom 443 were active, 376 had recovered and 21 (↑0) had died, according to the latest tally of the Central Tibetan Administration (CTA) as of Oct 30.