(TibetanReview.net, Nov10’20) – India’s health ministry raised concerns over dip in daily tests in some states like Punjab, Assam and Rajasthan though Covid-19 positivity rate had been steadily declining over the last three weeks and had come down to 7.19% on Nov 8 from 7.94% on Oct 18, reported the timesofindia.com Nov 10. Bringing the positivity rate to below 5% is considered critical for controlling the pandemic.

Another major concern was that capital Delhi had emerged as India’s Covid-19 capital last week, logging the highest number of fresh cases of 10,445 in the seven-day period and also recording the sharpest rise in infections in comparison with the previous week. Delhi was followed by neighbouring Haryana with 3,348 fresh cases over the previous week, followed by Himachal Pradesh (1,552) and Telangana (1,487), the report said.

However, the fall in cases were seen to be flattening out, rather than falling, in big states such as Karnataka and Maharashtra, the report added.

The latest data from India’s Ministry of Health and Family Welfare show that there were 38,073 new cases and 440 new deaths in the country in the past 24 hours as of Nov 10 at 8AM, taking their cumulative totals to 8,591,730 cases and 127,059 deaths. The fresh cases and deaths were less than during the previous 24 hour period.

The number of active cases remained below six lakh for the 12th consecutive day.

They were followed by six other states with more than 202,000 cases each and which included, Odisha, Telangana, Bihar, Rajasthan, Assam, and Chattisgarh in that order. 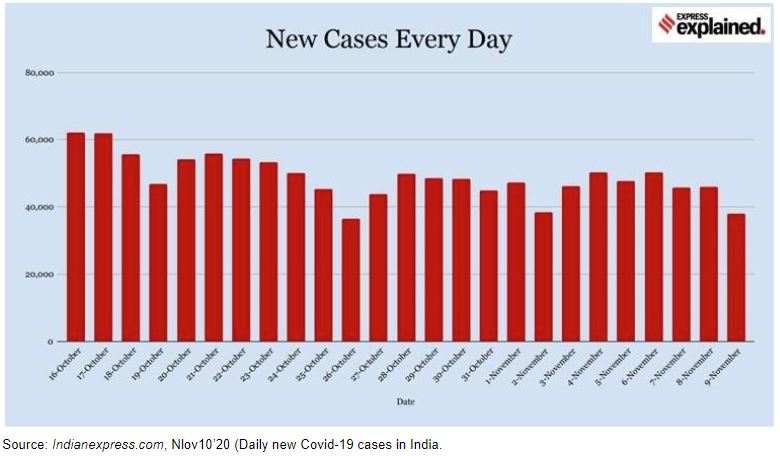