(TibetanReview.net, Nov08’20) – Covid-19 cases in India have now crossed the 8.5 million mark as the country reported more than 45,000 fresh cases over the past 24 hours on Nov 8 morning. Delhi has emerged as top contributors with Kerala, both reporting around 7,000 daily new cases.

The number of active cases remained below six lakh for the 10th consecutive day.

They were followed by Five other states with more than 208,000 cases each and which included, Odisha, Telangana, Bihar, Rajasthan, and Assam in that order.

Six more states, namely Chattisgarh, Haryana, Gujarat, Madhya Pradesh, Punjab, and Jharkhand had reported more than 104,000 cases each so far in that order. 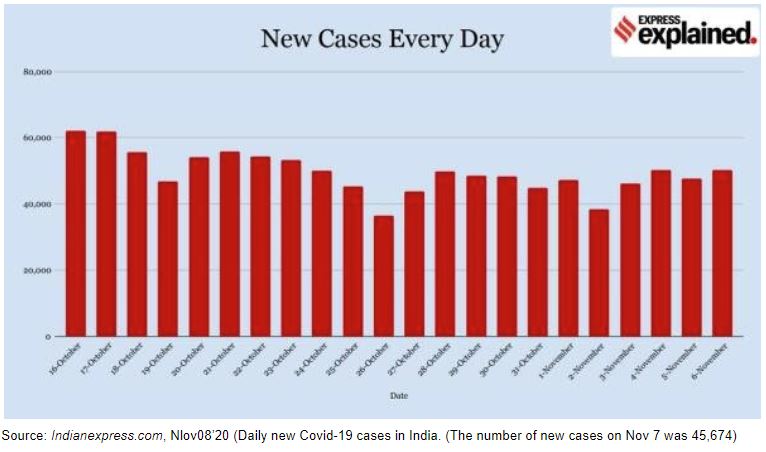 The total number of Covid-19 cases among Tibetans in India, Nepal and Bhutan had remained unchanged overnight at 1,043 (↑12), of whom 343 were active, 677 had recovered and 23 (↑0) had died, according to the latest tally of the Central Tibetan Administration (CTA) as of Nov 08.

A major new outbreak was reported to have taken place at the Tibetan Children Village school at Chauntra Village under Jogindernagar municipality of Mandi district, Himachal Pradesh, reported tribuneindia.com Nov 7. The report said the outbreak had occurred after the school reopened recently for its Class X and XII students. A total of the 92 had tested positive, of whom 40 were boys and 27 were girls, with the remaining 25 being school employees.

The majority of the students were reported to be from Ladakh, Nepal, Arunachal Pradesh and South India.