(TibetanReview.net, Oct14’20) – The nearly month-long declining trend in detection of new Covid-19 infections has ensured that, for the first time since the epidemic started in India, the growth rate of cases had dropped below one per cent a day. And the seven-day compounded daily growth rate, for the country as a whole, fell to 0.99 per cent on Oct 13, reported the indianexpress.com Oct14.

The report said that at its height, growth rate had exceeded 7 per cent per day in the first week of May. But there has been a steady decline after that, which expedited in the last one month which saw considerable decline in the daily numbers, from a high of about 98,000 cases to less than 70,000 cases right now, the report added.

The cumulative positivity rate now stands at 8%, whereas India is conducting around 64,275 tests per million population, the report noted.

The country has been recording less than 75,000 new infections daily for the sixth consecutive day and fatalities below 1,000 for 11 straight days.

Four states, namely Maharashtra, Andhra Pradesh, Karnataka, and Tamil Nadu have accumulated more than 660,000 cases each in that order.

Six other states, namely Uttar Pradesh, Delhi, Kerala, West Bengal, Odisha, and Telangana had more than 210,000 each in that order. 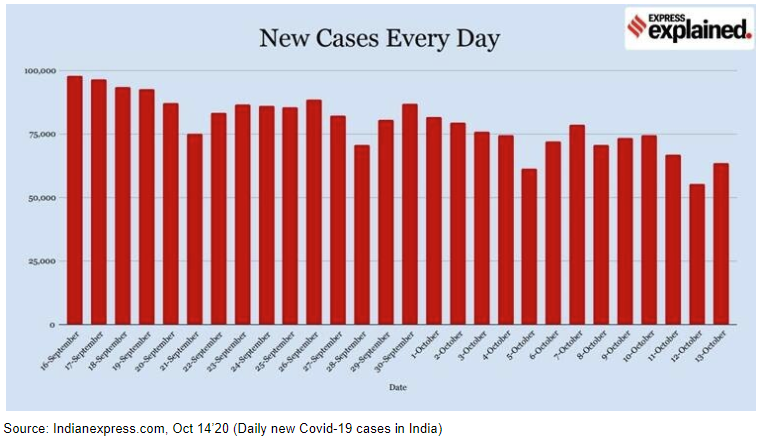 The total number of Covid-19 cases among Tibetans in India, Nepal and Bhutan had remained unchanged at 567 (↑0), of whom 318 were active, 233 had recovered and 16 (↑0) had died, according to the tally of the Central Tibetan Administration (CTA) as of Oct 14.

To begin with, buses would start plying to 25 destinations, including Chandigarh, Pathankot, Baddi, Hoshiarpur, Ludhiana, Ambala and Haridwar. Only non-AC buses would ply on interstate routes and the night service would also be available. The service would soon be extended to other destinations, the minister was cited as saying.