India thus accounts for close to 10 per cent of all the recorded coronavirus deaths in the world and has been contributing as high as 15 to 25 per cent of global deaths these days, the report said.

The United States, the only country to have recorded more coronavirus deaths than India, has been reporting considerably lesser number of deaths now, on some days less than 300, the report added.

Meanwhile, for the 11th successive day, India’s active Covid-19 cases remained less than 1 million, while the country continued to maintain its global position of having the maximum number of recovered patients, the tribuneindia.com Oct 2 cited India’s Health Ministry as saying.

“The last 10 lakh recoveries were added in just 12 days. With this, India continues to maintain its global position of being the country with the maximum number of recovered COVID patients in the world,” the Ministry was quoted as saying.

Four states, namely Maharashtra, Andhra Pradesh, Karnataka, and Tamil Nadu have accumulated more than 600,000 cases each in that order.

Two other states/ Union Territories, namely Jharkhand, and Jammu & Kashmir had reported more than 76,000 cases each so far in that order.

Besides, there were seven other states/Union Territories with a total more than 2,000 cases each, namely Nagaland, Meghalaya, Ladakh, Andaman and Nicobar Islands, Dadra and Nagar Haveli, Sikkim, and Mizoram in that order. 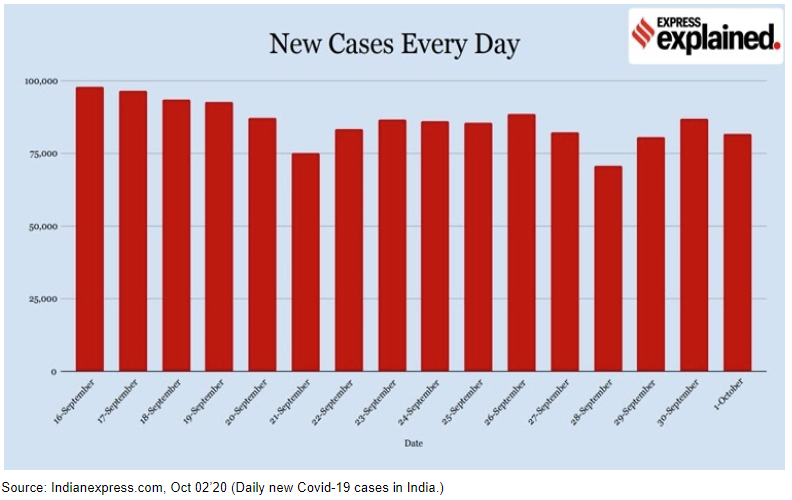 The total number of Covid-19 cases among Tibetans in India, Nepal and Bhutan had increased to 377 (↑6), of whom 166 were active, 198 had recovered and 13 had died, according to the tally of the Central Tibetan Administration (CTA) as of Sep 30.

The CTA said Oct 2 that were 36 cases in the Tibetan community over the past one week: 2 from Sonada, 1 from Kollegal, 2 from Chauntra, 4 from Delhi, 4 from Bylakuppe, 1 from Tenzin Khang, 2 from Miao, 1 from Mainpat, 1 from Hunsur, 13 from Mundgod, 2 from Orissa, 1 from Rajpur, 1 from Dehradun and 1 from Ladakh. Of them, 28 were male and 8 female. Besides, 13 were stated to be asymptomatic. The oldest was 84 and the youngest 19. An 80-year-old man from Sonada and an 84-year-old man in Mundgod were stated to have succumbed to the disease.