(TibetanReview.net, Nov06’20) – Covid-19 cases are again rising significantly in the USA and Europe while it appears to be flattening in India. The US set a grim new record on Nov 5 – following a week marked by high case numbers – surpassing 120,000 infections in a single day, reported edition.cnn.com Nov 6.

China has barred non-Chinese travellers from Britain, France, Belgium, the Philippines and India, imposing some of the most stringent entry curbs of any country as coronavirus cases surge around the world, reported Reuters Nov 5.

In India, Recoveries have outnumber new Covid-19 cases for 34th straight day, noted the indianexpress.com Nov 6. During this time, the active cases have almost halved, the daily detection of new cases has dropped to less than half of the peak achieved in September, and the growth rate has come down to just about 0.5 per cent per day, the report said.

India’s capital Delhi is, however, another matter. Cases in Delhi have been at historic highs in recent days. The city had multiple phases of sustained growth and decline, with very clear peaks, each bigger than the previous one, the report noted. For the last three days, the city has been recording almost 7,000 cases a day. No other city, including Pune, has ever detected more than 6,000 cases a day, it added.

The number of active cases remained below six lakh for the eighth consecutive day, noted the PTI new aency Nov 6.

They were followed by six other states with more than 205,000 cases each and which included West Bengal, Odisha, Telangana, Bihar, Assam, and Rajasthan in that order.

Six more states, namely Chattisgarh, Gujarat, Haryana, Madhya Pradesh, Punjab, and Jharkhand had reported more than 103,000 cases each so far in that order.

Two other states/ Union Territories, namely Jammu & Kashmir, and Uttarakhand had reported more than 64,000 cases each so far in that order.

Besides, there were seven other states/Union Territories with a total of more than 2,900 cases each, namely Meghalaya, Nagaland, Ladakh, Andaman and Nicobar Islands, Sikkim, Dadra and Nagar Haveli, and Mizoram in that order. 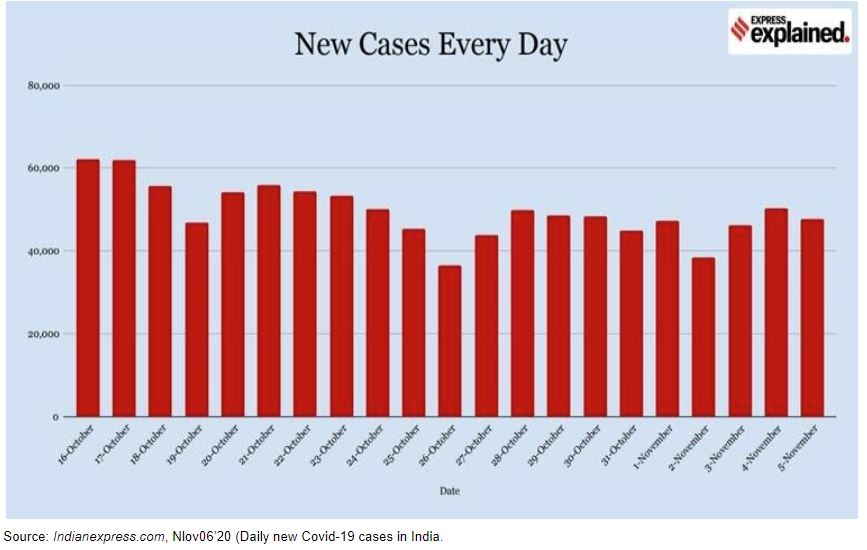 The total number of Covid-19 cases among Tibetans in India, Nepal and Bhutan had increased overnight to 1,031 (↑11), of whom 464 were active, 544 had recovered and 23 (↑1) had died, according to the latest tally of the Central Tibetan Administration (CTA) as of Nov 06.

The Tibetan community in India and Nepal reported 87 new cases over the past week indicating a sustained reduction in the cases compared to the week earlier, the CTA’s task force on Covid-19 has told a press briefing Nov 6. They were reported 34 from Mundgod, 24 from Ladakh, 15 from Bylakuppe, 4 from Delhi, 3 from Chauntra, 2 each from Dharamshala and Mainpat, and 1 from Dehradun.