(TibetanReview.net, Aug06’20) – The Covid-19 infection not only causes long-term damage to the lung but can also recur within months after recovery. Ninety per cent of a sample group of coronavirus-recovered patients from a prominent hospital in China’s Wuhan city where the pandemic broke out have reported lung damage and five per cent of them are again in quarantine after testing positive for the virus, reported zeenews.india.com Aug 6, citing China’s state-run Global Times newspaper Jun 5.

The fatality rate has thus further dropped to 2.07, which is much lower than the global rate of 3.8% or the US rate of slightly more than 3.3, noted the indianexpress.com Aug 6.

Nevertheless, this was the eighth consecutive day the number of daily new cases in India had increased by more than 50,000.

Besides, there were twelve other states/Union Territories with a total more than 1,000 cases each, namely Uttarakhand, Goa, Tripura, Puducherry, Manipur, Himachal Pradesh, Nagaland, Arunachal Pradesh, Ladakh, Dadra and Nagar Haveli, Chandigarh, and Andaman and Nicobar Islands in that order.

Finally, there were three other states/Union Territories with less than 1,000 cases each, namely, Meghalaya, Sikkim, and Mizoram in that order. 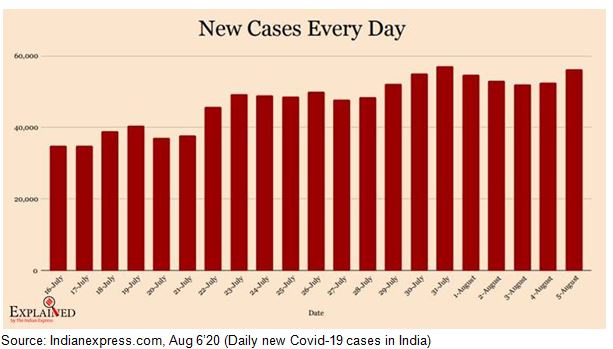 The total number of Covid-19 cases among Tibetans in India and Nepal stood at a total of 76 (↑1) so far, of whom 11 were active, 63 had recovered and two had died, according to the tally of the Central Tibetan Administration as of Aug 6.