(TibetanReview.net, Nov03’20) – Only two states in India, namely Delhi and Mizoram, have shown increases in Covid-19 cases over the past two weeks vis-à-vis the preceding 14 days, noted the timesofindia.com Nov 3. These two weeks (Oct 18-Nov 1) saw Kerala emerged as the Covid-19 capital of the country, logging the highest number of fresh infections, even though the pandemic actually showed a decline as compared with the previous 14 days in the state, the report noted.

The latest daily number of new cases, at 38,310, was much less than the daily number of those who had recovered, at 58,323, leading to a significant decrease in the number of active cases by 20,503.

The number of active cases remained below six lakh for the fifth consecutive day.

They were followed by seven other states with more than 200,000 cases each and included Delhi, West Bengal, Odisha, Telangana, Bihar, Assam, and Rajasthan in that order.

Six other states, namely Chattisgarh, Gujarat, Madhya Pradesh, Haryana, Punjab, and Jharkhand had reported more than 102,000 cases each so far in that order.

Two other states/ Union Territories, namely Jammu & Kashmir, and Uttarakhand had reported more than 62,000 cases each so far in that order.

Besides, there were seven other states/Union Territories with a total of more than 2,700 cases each, namely Meghalaya, Nagaland, Ladakh, Andaman and Nicobar Islands, Sikkim, Dadra and Nagar Haveli, and Mizoram in that order. 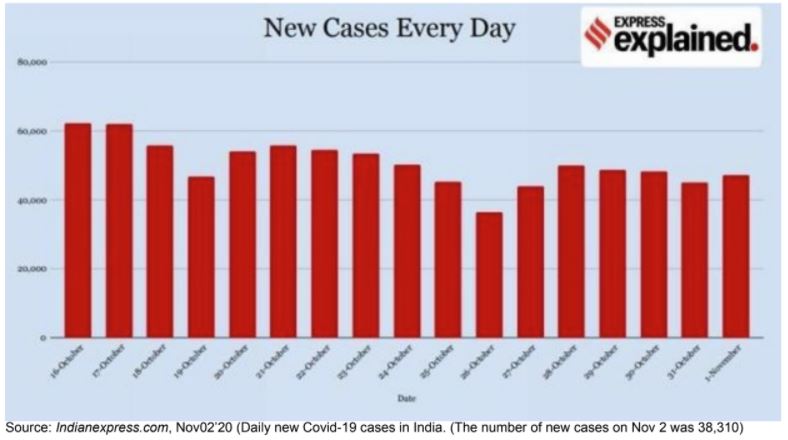 The total number of Covid-19 cases among Tibetans in India, Nepal and Bhutan had increased after six days to 1,005 (↑65), of whom 461 were active, 522 had recovered and 22 (↑1) had died, according to the latest tally of the Central Tibetan Administration (CTA) as of Nov 03.