(TibetanReview.net, Nov07’20) – Delhi is now the top focus of bad news about the spread of Covid-19 infections in India. While across India, cases, though still among the highest in the world, have been flattening out, with the country reporting more recoveries than new infections for the 34th day, Delhi has been seeing record high daily new infections in recent days. With 7,178 new cases reported on Nov 7, the national capital became the top contributor to India’s daily total for the first time in more than four months, ahead of Kerala and Maharashtra, noted the indianexpress.com Nov 7.

Meanwhile China has suspended entry to visitors from nine countries due to a 45% rise in the number of imported cases in October. These included Italy, Russia, India, the UK, France, the Philippines, Belgium, Ukraine and Bangladesh.

In the United States, 20 states have already reported at least one record high day of new Covid-19 cases during the month, reported edition.cnn.com Nov 6. Following a week marked by high case numbers, the entire country set a grim new Covid-19 record on Nov 5 – surpassing 120,000 infections in a single day. It was the second day in a row the US reported more than 100,000 infections, the report noted.

The number of active cases remained below six lakh for the ninth consecutive day.

They were followed by six other states with more than 207,000 cases each and which included West Bengal, Odisha, Telangana, Bihar, Assam, and Rajasthan in that order.

Six more states, namely Chattisgarh, Gujarat, Haryana, Madhya Pradesh, Punjab, and Jharkhand had reported more than 103,000 cases each so far in that order.

Two other states/ Union Territories, namely Jammu & Kashmir, and Uttarakhand had reported more than 64,000 cases each so far in that order.

Besides, there were seven other states/Union Territories with a total of more than 3,000 cases each, namely Meghalaya, Nagaland, Ladakh, Andaman and Nicobar Islands, Sikkim, Dadra and Nagar Haveli, and Mizoram in that order. 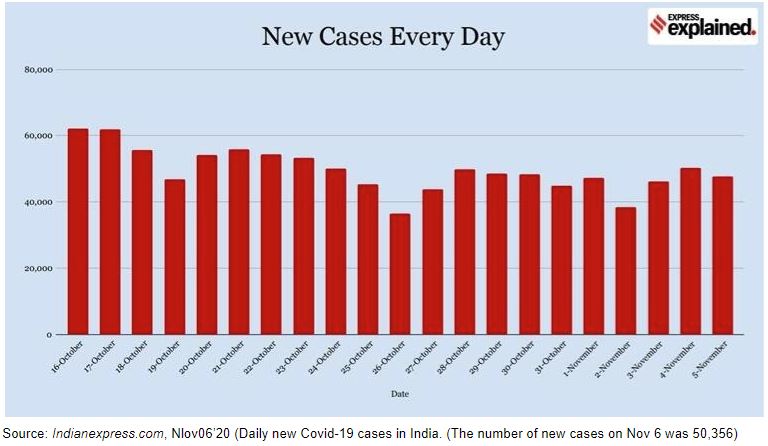 The total number of Covid-19 cases among Tibetans in India, Nepal and Bhutan had remained unchanged overnight at 1,031 (↑0), of whom 464 were active, 544 had recovered and 23 (↑0) had died, according to the latest tally of the Central Tibetan Administration (CTA) as of Nov 07.