(TibetanReview.net, Nov12’20) – Delhi, the national capital of India, is now the country’s Covid-19 capital as well, with the city recording the highest single-day tally of 8,593 new cases and 85 deaths in the last 24 hours. The previous high was on Nov 10, when the capital recorded 7,830 cases, noted the timesofindia.com Nov 12. These were the highest nationally too.

The sharp rise in cases suggests that the infection is spreading fast, and the rising number of deaths is an indication of people developing severe symptoms, the report noted.

The positivity rate – the number of those found positive out of the total of those tested – was reported to have gone up to 13.4% from less than 6% in July.

In India as a whole, however, reported infections, deaths and the share of people testing positive had all fallen significantly, although they had now flattened. From a high point of nearly 98,000 daily infections on Sep 16, the average dropped to about 46,000 cases per day this past week, noted the New York Times Nov 12, adding the number of daily virus deaths had fallen to around 500 from 1,200 in mid-Sep.

By contrast, infections in Europe and the United States were surging, it added.

The latest data from India’s Ministry of Health and Family Welfare show that there were 47,905 new cases and 550 new deaths in the country in the past 24 hours as of Nov 12 at 8AM, taking their cumulative totals to 8,683,916 cases and 128,121 deaths. The fresh cases were more than that reported the day before by nearly than 3,200.

The number of active cases fell below five lakh for the second day after 106 days, after remaining below six lakh for 12 consecutive days.

They were followed by six other states with more than 205,000 cases each and which included, Odisha, Telangana, Bihar, Rajasthan, Assam, and Chattisgarh in that order. 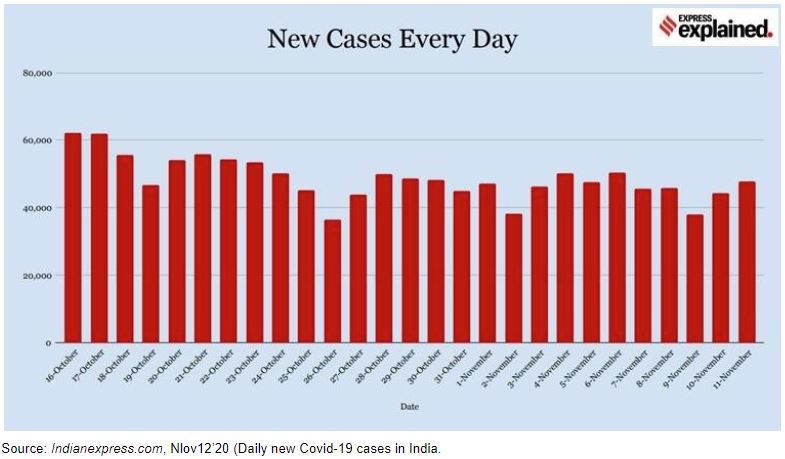