Did Covid-19 outbreak in India peak in September?

(TibetanReview.net, Oct05’20) – Data for the 14-day period from Sep 17 to 30 suggest that the Covid-19 cases in India may have crossed the peak, reported the timesofindia.com Oct 5, citing the country’s finance ministry in a report which has, however, cautioned that the disease was far from over and urged all stakeholders to push for economic recovery as positivity rate improves.

Covid-19 infections in India continued to fall for the third straight week, adding to the growing evidence that the pandemic may now be past its peak in the country, at least for now, said another timesofindia.com report Oct 5. It said India recorded just over 5.5 (lakh) fresh cases during the Sep 28-Oct 4 period, the lowest tally in five weeks. It also said that the highest number of new cases recorded in India during a week was 6,45,014 in the Sep 7-13 period.

However, the virus continued to surge in several parts of the country despite the overall dip, the report cautioned.

The weekly death toll from the novel virus was reported to have followed a similar trend, with the recorded total of 7,143 fatalities in the last seven days being the lowest in four weeks. This was the second straight week of fall after fatalities had peaked at 8,175 during the Sep 14-20 week, the report said.

Also, India has exceeded the 140 tests per day for per million population, as advised by the World Health Organization for comprehensive surveillance, of Covid-19 by nearly six times, yet another timesofindia.com report Oct 5 cited the country’s Ministry of Health and Family Welfare as saying Oct 5.

Four states, namely Maharashtra, Andhra Pradesh, Karnataka, and Tamil Nadu have accumulated more than 610,000 cases each in that order.

Three other states/ Union Territories, namely Jharkhand, Jammu & Kashmir, and Uttarakhand had reported more than 51,000 cases each so far in that order. 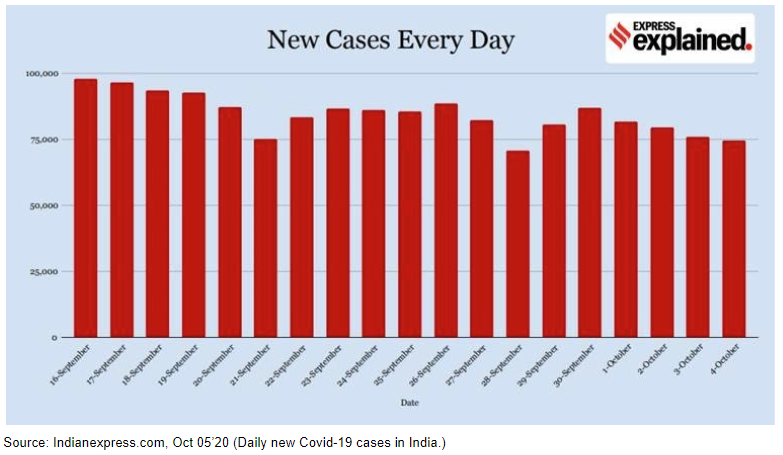 The total number of Covid-19 cases among Tibetans in India, Nepal and Bhutan had remained unchanged in the past three days at 377 (↑0), of whom 166 were active, 198 had recovered and 13 had died, according to the tally of the Central Tibetan Administration (CTA) as of Oct 05.