(TibetanReview.net, Sep26’20) – Fresh Covid-19 cases in India on Sep 25 did not show a rise as compared with the past two days despite a steep increase in testing, an indication that the pandemic in the country may be past its peak, at least for now, reported the timesofindia.com Sep 26. Meanwhile the weekly medical journal The Lancent had in its editorial accused the Indian government of putting a “too positive spin” on the Covid-19 situation in the country while also raising concerns about the Indian Council of Medical Research (ICMR) “straying from scientific evidence” to present a more optimistic assessment, reported theprint.in Sep 25.

But the timesofindia.com report said signs of a slowdown in the virus’s transmission were evident from last week itself, when the weekly count of cases had decreased over the previous week for the first time since the outbreak of Covid-19 in the country. However, a big drop in testing in the first three days of this week had led to doubts over what was causing the fall in numbers.

It may also be worth pointing out that the number of active cases has been showing a general declining trend in recent days.

Four states, namely Maharashtra, Andhra Pradesh, Tamil Nadu, and Karnataka have accumulated more than 550,000 cases each in that order.

Three other states/ Union Territories, namely Chattisgarh, Jharkhand, and Jammu & Kashmir had reported more than 69,000 cases each so far in that order.

Besides, there were nine other states/Union Territories with a total more than 1,800 cases each, namely, Manipur, Arunachal Pradesh, Nagaland, Meghalaya, Ladakh, Andaman and Nicobar Islands, Dadra and Nagar Haveli, Sikkim, and Mizoram in that order. 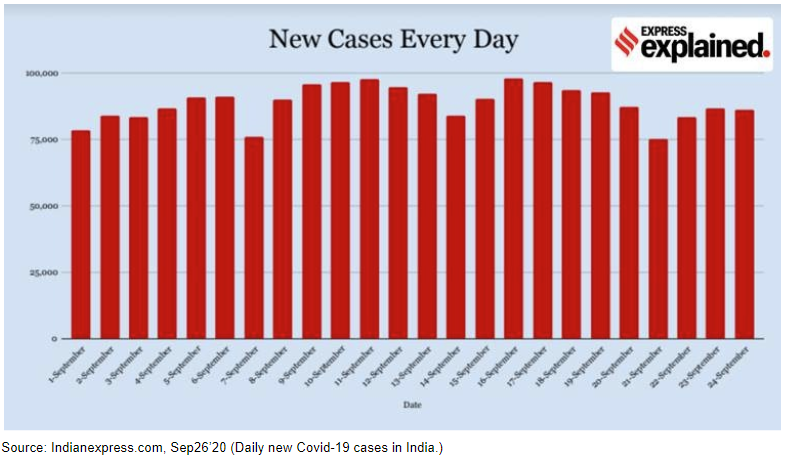 The total number of Covid-19 cases among Tibetans in India, Nepal and Bhutan had remained unchanged at 357 (↑0), of whom 147 were active, 198 had recovered and 12 had died, according to the tally of the Central Tibetan Administration as of Sep 26.