(TibetanReview.net, Sep18’20) – The number of confirmed Covid-19 cases across the globe has surpassed 30 million, with the number of those who have died from it crossing 946,000, according to figures by America’s Johns Hopkins University which are based on official reports. The US, India and Brazil have the most number of confirmed cases, but there is a renewed spike in infections across Europe, noted the bbc.com Sep 18.

The US remains by far the worst-hit country in terms of sheer numbers, with more than 6.6 million confirmed infections, and over 197,000 deaths. The number of new daily infections has been dropping, though, after a spike in July, the report noted.

The same cannot be said of India, however, where the number of known infections climbed above five million this week – the second-highest caseload in the world – with the number of daily new cases often hitting world records of nearly 100,000. However, India has a population of 1.3 billion.

Meanwhile many northern hemisphere countries were stated to be now bracing for a second wave of the pandemic that China had unleashed on the world late last year by hiding and censoring information about the outbreak and punishing whistleblowers while continuing to allow gatherings and travels to take place.

Besides, the latest daily number of new cases, at 96,424, was more than the daily number of those who had recovered, at 87,472, leading to an increase in the number of active cases by 7,778.

Four states, namely Maharashtra, Andhra Pradesh, Tamil Nadu, and Karnataka have accumulated more than 490,000 cases each in that order.

Five other states, namely Madhya Pradesh, Punjab, Chattisgarh, Jharkhand, and Jammu & Kashmir had reported more than 59,000 cases each so far in that order.

Besides, there were 10 other states/Union Territories with a total more than 1,500 cases each, namely, Chandigarh, Manipur, Arunachal Pradesh, Nagaland, Meghalaya, Andaman and Nicobar Islands, Ladakh, Dadra and Nagar Haveli, Sikkim, and Mizoram in that order. 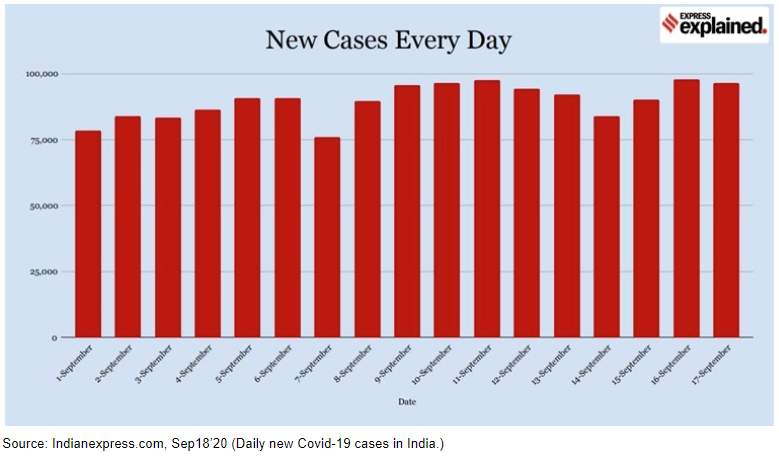 The total number of Covid-19 cases among Tibetans in India, Nepal and Bhutan had remained unchanged at 291 (↑0), of whom 171 were active, 109 had recovered and 11 had died, according to the tally of the Central Tibetan Administration as of Sep 18.