(TibetanReview.net, Aug07’20) – India has just become the third country in the world to report more than two million Covid-19 infections after the United States and Brazil. However, citing the country’s high recovery and low fatality rates, and given the size of its population vis-à-vis the other badly affected countries, the government of India continues to be positive about its record in containing the pandemic’s spread.

Nevertheless, as pointed out by bbc.com Aug 6, India confirmed the last million cases in just 20 days, faster than the US (43 days) or Brazil (27 days) which currently have higher numbers.

India is also generating the highest number of daily new cases in the world, the report said.

Still, this was the ninth consecutive day the number of daily new cases in India had increased by more than 50,000.

Besides, there were twelve other states/Union Territories with a total more than 1,000 cases each, namely Uttarakhand, Goa, Tripura, Puducherry, Manipur, Himachal Pradesh, Nagaland, Arunachal Pradesh, Ladakh, Dadra and Nagar Haveli, Chandigarh, and Andaman and Nicobar Islands in that order.

Finally, there were three other states/Union Territories with less than 1,000 cases each, namely, Meghalaya, Sikkim, and Mizoram in that order. 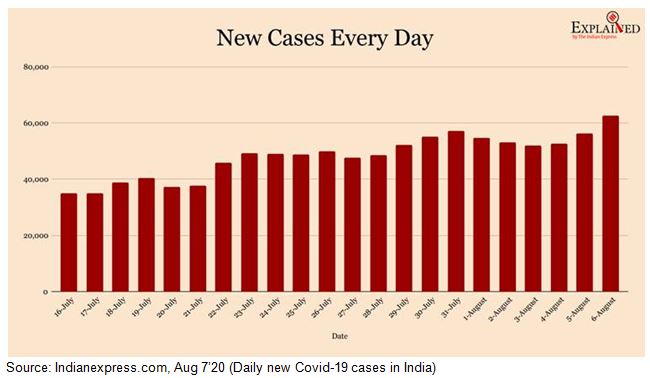 The total number of Covid-19 cases among Tibetans in India and Nepal stood at a total of 79 (↑3) so far, of whom 12 were active, 65 had recovered and two had died, according to the tally of the Central Tibetan Administration as of Aug 7 morning.