(TibetanReview.net, Oct22’20) – Argentina, Brazil, Britain, France, India, Russia and the United States have helped push the global Covid-19 tally to more than 40.7 million with large numbers of new coronavirus cases over the past week, reported the New York Times Oct 21. The global total has since crossed 41.243 million on Oct 22.

The report said India reported 411,718 over the past seven days, but numbers had been falling since mid-September. “It sounds like good news”, it added, “but the lower numbers have raised questions about the reliability of the rapid tests that have become more widespread there.”

Whatever may be the case, India recorded less than 60,000 new Covid-19 cases for the third day in a row (not counting Monday’s low tally), indicating another steep fall in infections in the country, reported the timesofindia.com Oct 22.

Besides, active cases had declined in every major state except Delhi and West Bengal in the last one week, reported the indianexpress.com Oct 22. Even Kerala, the fastest growing state right now, has seen a small drop in the active cases in the last week, it added.

The report noted that the number of active cases were now more than three lakh lower than the peak that was achieved in the middle of October. There have been only five days since Sep 17 when detection of new infections had exceeded the number of people recovering from the disease, it said. 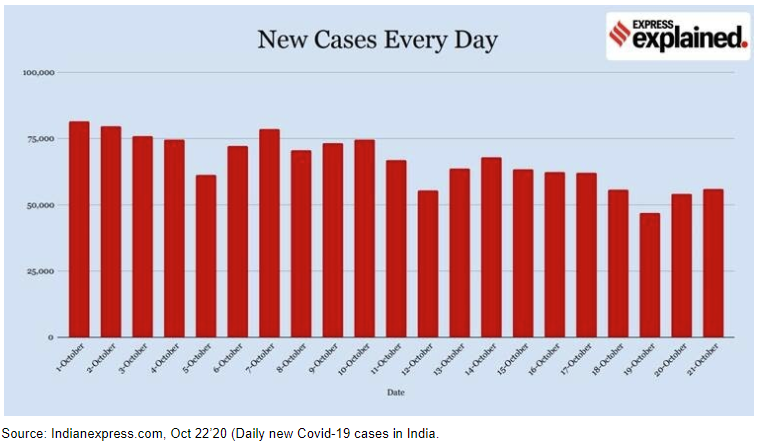