(TibetanReview.net, Oct11’20) – India has become the second country after the United States to cross the grim milestone of seven million Covid-19 infections this morning. However, on the positive side, the country has recorded its six millionth recovery and the ninth consecutive day of decline in active cases, noted the timesofindia.com Oct 11.

Also, the number of deaths from the pandemic remained below 1,000 for the eighth consecutive day.

And the active cases have sustained on the downslide and are less than 9 lakh for the past three days, noted the tribuneindia.com Oct 11.

Four states, namely Maharashtra, Andhra Pradesh, Karnataka, and Tamil Nadu have accumulated more than 650,000 cases each in that order.

Three other states/ Union Territories, namely Jharkhand, Jammu & Kashmir, and Uttarakhand had reported more than 54,000 cases each so far in that order. 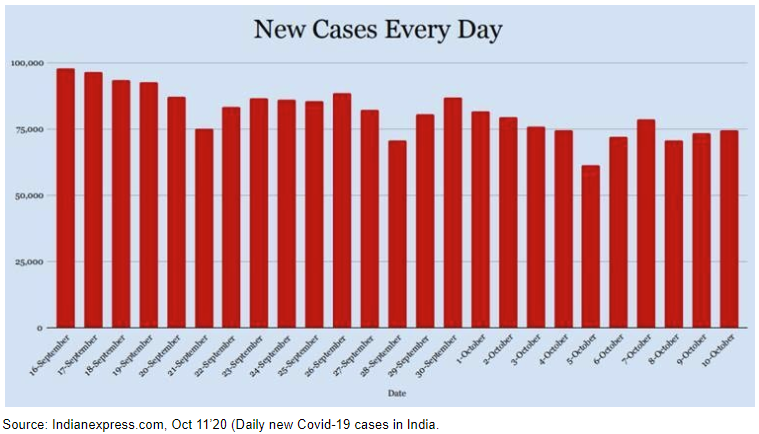 The total number of Covid-19 cases among Tibetans in India, Nepal and Bhutan had remained unchanged for the second day at 535 (↑0), of whom 287 were active, 233 had recovered and 15 (↑0) had died, according to the tally of the Central Tibetan Administration (CTA) as of Oct 11.