(TibetanReview.net, Aug21’20) – India recorded more than 1.2 million fresh Covid-19 cases in August, higher than in any previous month and the highest count by any country during this month, reported the timesofindia.com Aug 21. Its count of cases in August at 1,207,539 continues to be the world’s highest, with the US in second place (9,94,863 cases till Aug 19) and Brazil third (7,94,115), the report said, citing worldometers.info.

However, with the daily growth rate continuing to slow down, the doubling time of novel Coronavirus cases in India has now dropped to 30 days, reported the indianexpress.com Aug 21. The report noted: “Doubling time is a function of the growth rate. Lower the growth, higher is the doubling time. It is one of the several metrics used to assess the pace at which the epidemic has been spreading in the population.”

The report added: “The ten-day doubling period was crossed in the first week of May, and after that there has been a steady elongation of this time.”

Seven other states, namely Telangana, Assam, Gujarat, Odisha,Rajasthan, Kerala, and Haryana had reported more than 50,000 cases each so far in that order. 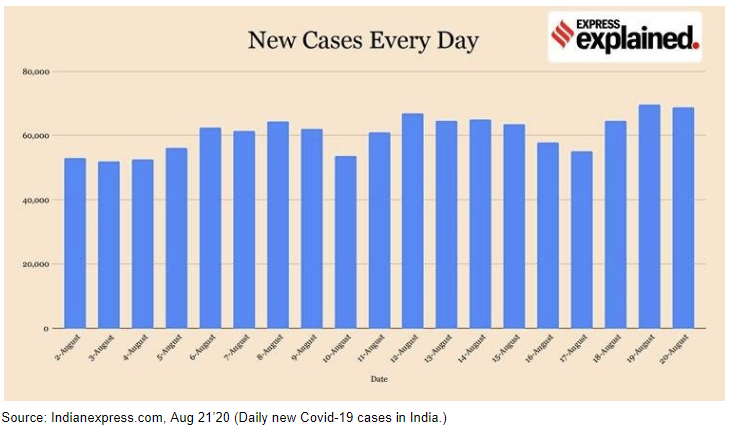 The total number of Covid-19 cases among Tibetans in India, Nepal and Bhutan stood at a total of 94 (↑0) so far, of whom 14 were active, 77 had recovered and three had died, according to the tally of the Central Tibetan Administration as of Aug 21 morning.