(TibetanReview.net, Aug09’20) – With yet another highest single-day spike in Covid-19 cases, India’s tally zoomed past 2.1 million on Aug 9 morning, maintaining its status of being the country with the most number of daily new infections across the world for the fifth time in the last six days.

The United States and Brazil, two countries that have greater number of people infected by the virus till now, have been finding fewer number of new cases every day during this period, while India’s case numbers have been increasing steadily, with more than 60,000 new cases for the last three days, reported the indianexpress.com Aug 9. The numbers in the United States and Brazil have not gone past lower 50,000s in the last three days, it added.

But while new infections were rising at a steady pace in India, the growth in the total number of infected cases had been on the decline again for the last 10 days, said another indianexpress.com report Aug 9. It added that the growth of active cases was declining even faster.

At 3.03% per day, the current growth rate of total confirmed cases was already at an all-time low. And the growth rate of active cases had fallen to 1.31%, the report added.

This was the 11th consecutive day the number of daily new cases in India increased by more than 50,000.

India is the country with the third highest total number of infections, standing behind the USA and Brazil. It also has the fifth highest number of deaths from the pandemic. Only the USA, Brazil, the UK, and Mexico have reported more deaths than India.

Six other states, namely West Bengal, Telangana, Bihar, Gujarat, Assam, and Rajasthan had reported more than 50,000 cases each in that order.

Besides, there were 13 other states/Union Territories with a total more than 1,000 cases each, namely Uttarakhand, Goa, Tripura, Puducherry, Manipur, Himachal Pradesh, Nagaland, Arunachal Pradesh, Ladakh, Dadra and Nagar Haveli, Chandigarh, Andaman and Nicobar Islands, and Meghalaya in that order.

Finally, there were two other states with less than 1,000 cases each, namely Sikkim, and Mizoram in that order. 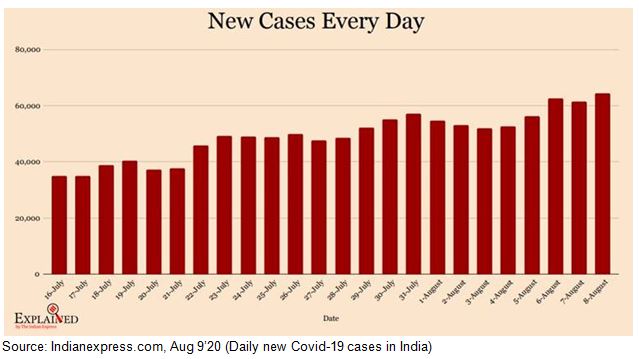 The total number of Covid-19 cases among Tibetans in India and Nepal stood unchanged at a total of 79 so far, of whom 12 were active, 65 had recovered and two had died, according to the tally of the Central Tibetan Administration as of Aug 9 morning.