(TibetanReview.net, Aug30’20) – India is now adding the highest number of Covid-19 cases to the global tally, which crossed 25 million on Aug 30, with the country reporting more than 78,700 on Aug 29, the highest-ever single day increase, exceeding the United States’ record in mid-July of 77,299 cases, reported the indianexpress.com Aug 30.

However, the latest daily number of new cases, at 78,761, was more than the daily number of those who had recovered, at 64,935, which meant a significant increase in the number of active cases by 13,826.

Besides being the country with the third highest total number of infections, standing behind the USA and Brazil, India also has the fourth highest number of covid-19 deaths. Only the USA, Brazil, and Mexico have reported more deaths than India. While this is according to the Johns Hopkins University data, timesofindia.com, which relies on Indian government data, noted Aug 29 that the country already had the word’s third highest number of Covid-19 deaths.

Seven other states, namely Odisha, Gujarat, Rajasthan, Kerala, Haryana, Madhya Pradesh, and Punjab had reported more than 50,000 cases each so far in that order.

Besides, there were 11 other states/Union Territories with a total more than 1,000 cases each, namely, Manipur, Himachal Pradesh, Chandigarh, Arunachal Pradesh, Nagaland, Andaman and Nicobar Islands, Ladakh, Dadra and Nagar Haveli, Meghalaya, Sikkim, and Mizoram in that order. 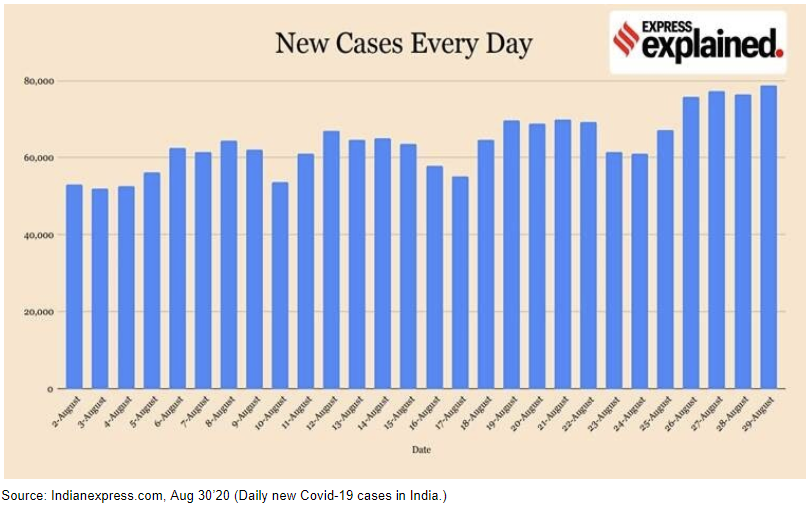 The total number of Covid-19 cases among Tibetans in India, Nepal and Bhutan had remained unchanged at 138 (↑0) so far, of whom 55 were active, 80 had recovered and three had died, according to the tally of the Central Tibetan Administration as of Aug 30 morning.