(TibetanReview.net, Sep28’20) – The Covid-19 pandemic could finally be slowing down in India, at least for now, even as the total number of cases in it crossed the six million mark on Sep 28 morning, noted the timesofindia.com Sep 28.

However, despite a slowdown in the spread of the infections over the past 10 days or so, India continues to add the highest number of daily cases in the world. The average daily case count this week (Sep 21-27) was more than 84,000 as over 5,90,605 fresh infections were logged during this period, the report said.

Four states, namely Maharashtra, Andhra Pradesh, Tamil Nadu, and Karnataka have accumulated more than 570,000 cases each in that order.

Two other states/ Union Territories, namely Jharkhand, and Jammu & Kashmir had reported more than 72,000 cases each so far in that order.

Besides, there were eight other states/Union Territories with a total more than 1,900 cases each, namely Arunachal Pradesh, Nagaland, Meghalaya, Ladakh, Andaman and Nicobar Islands, Dadra and Nagar Haveli, Sikkim, and Mizoram in that order. 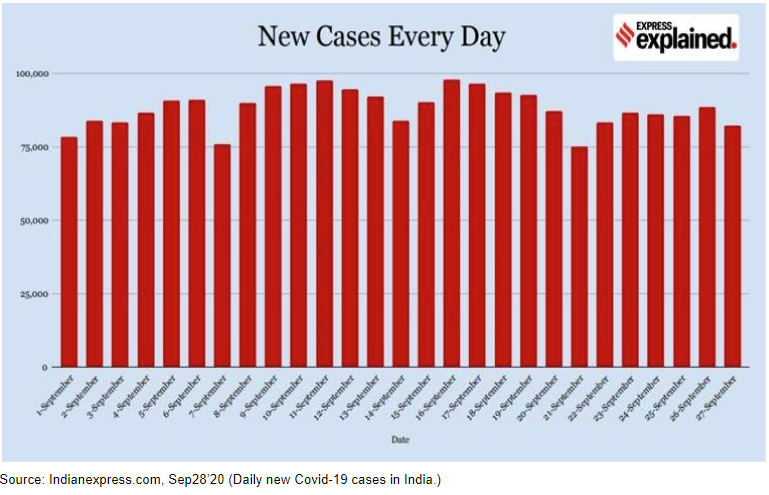 The total number of Covid-19 cases among Tibetans in India, Nepal and Bhutan had increased after two days to 365 (↑8), of whom 155 were active, 198 had recovered and 12 had died, according to the tally of the Central Tibetan Administration as of Sep 28.