(TibetanReview.net, Nov21’20) – India on Nov 21 morning reported its highest number of daily new Covid-19 cases in the past nine days at more than 46,000, noted the timesofindia.com Nov 21. Across north and central India, there were signs that the Covid-19 pandemic was surging again post-Diwali, the report said.

While declines in active cases have been reported from badly-hit states like Maharashtra, Karnataka, Kerala, and West Bengal, northern states such as Delhi, Haryana, Rajasthan, and Himachal Pradesh have reported sharp rises in active cases due to surge in new cases.

The number of active cases remained below five lakh for the 11th day after remaining below six lakh for 12 days. 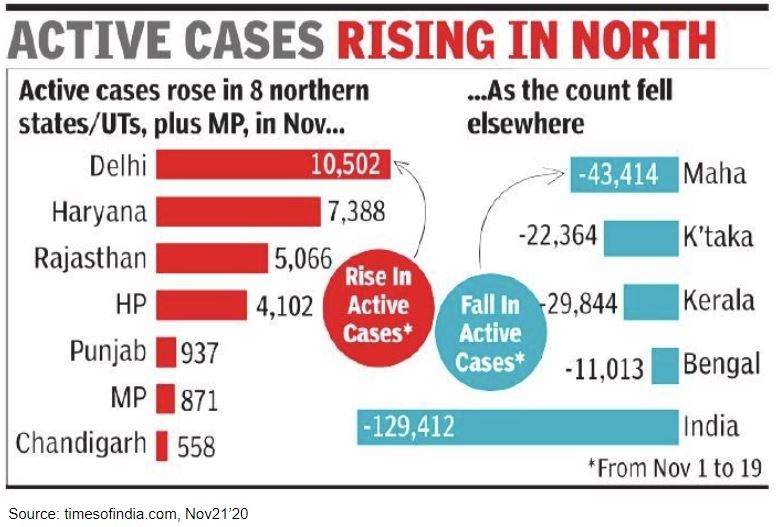 They were followed by seven other states with more than 211,000 cases each and which included, Odisha, Telangana, Rajasthan, Bihar, Chattisgarh, Haryana, and Assam in that order.

Besides, there were five other states/Union Territories with a total of more than 3,000 cases each, namely, Ladakh, Sikkim, Andaman and Nicobar Islands, Mizoram, and Dadra and Nagar Haveli and in that order.

The total number of Covid-19 cases among Tibetans in India, Nepal and Bhutan remained unchanged at 1,230 (↑0), of whom 285 were active, 916 had recovered and 29 (↑0) had died, according to the latest tally of the Central Tibetan Administration (CTA) as of Nov 21.