(TibetanReview.net, Nov13’20) – India’s capital Delhi has for the first time reported more than 100 deaths from the Covid-19 pandemic on Nov 13 morning. The city currently reports more daily news cases than any other state in the county, with the latest figure being 7,053, which is significantly more than the second highest figure of 5,537 fresh cases reported from Kerala.

Addressing a press conference Nov 13, chief minister Arvind Kejriwal has said, “Covid-19 cases have been increasing for the last few days. I am also concerned about it. We have been taking all appropriate measures to control it. We are considering taking more steps next week. I think the situation should come under control in 7 to 10 days and the cases should start decreasing.”

The latest data from India’s Ministry of Health and Family Welfare show that there were 44,879 new cases and 547 new deaths in the country in the past 24 hours as of Nov 13 at 8AM, taking their cumulative totals to 8,728,795 cases and 128,668 deaths. The fresh cases were reported to be less that reported the day before by 6%.

The number of active cases fell below five lakh for the third day after remaining below six lakh for 12 consecutive days.

They were followed by six other states with more than 207,000 cases each and which included, Odisha, Telangana, Bihar, Rajasthan, Assam, and Chattisgarh in that order.

Besides, there were six other states/Union Territories with a total of more than 3,000 cases each, namely, Nagaland, Ladakh, Andaman and Nicobar Islands, Sikkim, Mizoram, and Dadra and Nagar Haveli and in that order. 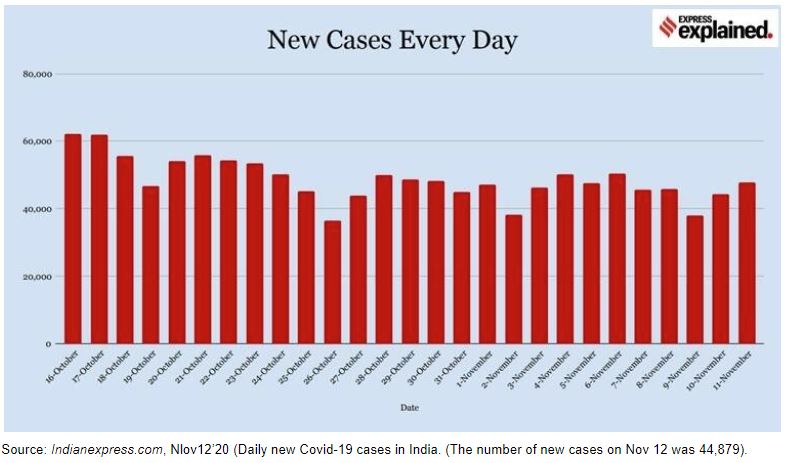 The CTA’s task forced on Covid-19 hs told a media briefing Nov 12 that The highest number of new cases during the past week was reported from Suja with 66 cases, followed by Ladakh with 27, Mundgod with 10, Delhi with 5, Chauntra and Orissa with 3 each, Dharamshala with 2, Mainpat with 2, Dalhousie with 2, Dekyiling with 2, Darjeeling with 2, and Hunsur, Miao, Clement town and Rajpur with 1 each. Nine new cases had been reported from Kathmandu, Nepal.