(TibetanReview.net, Oct10’20) – The number of people testing positive for the Covid-19 infection in India has remained lower than the number of those recovering from the disease for seven successive days, the longest unbroken trend thus far, reported the indianexpress.com Oct 10. Besides, the weekly average of new cases has been less than the average number of daily recoveries for the last three weeks, noted the timesofindia.com Oct 10.

The new detections have remained lower than the recoveries on 17 of the last 22 days, resulting in an important reduction in the number of active cases in the country, from a high of 10.17 lakh to less than 8.9 lakh, the indianexpress.com report said.

The report sees this as an indication of the epidemic having peaked, at least when the trend holds for at least a few weeks at a stretch.

The report cautioned, however, that such a conclusion might be premature. An epidemic like this can end only if there aren’t enough people left for the virus to infect, or people have been made immune to the virus through vaccination. None of this has happened right now, it added.

Four states, namely Maharashtra, Andhra Pradesh, Karnataka, and Tamil Nadu have accumulated more than 640,000 cases each in that order.

Three other states/ Union Territories, namely Jharkhand, Jammu & Kashmir, and Uttarakhand had reported more than 54,000 cases each so far in that order. 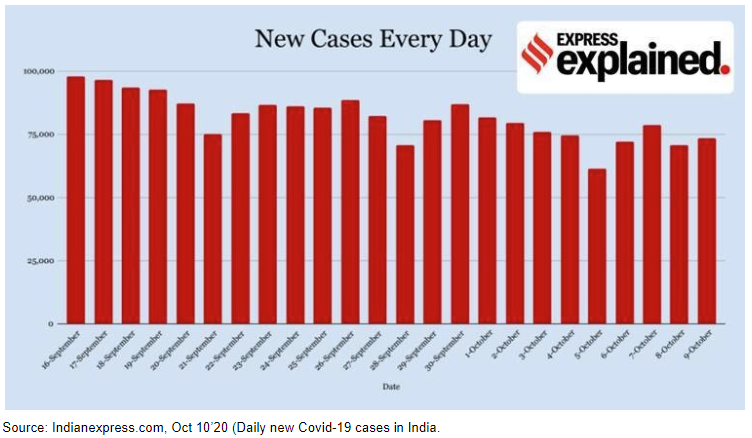 The total number of Covid-19 cases among Tibetans in India, Nepal and Bhutan had remained unchanged at 535 (↑132), of whom 287 were active, 233 had recovered and 15 (↑1) had died, according to the tally of the Central Tibetan Administration (CTA) as of Oct 10.