(TibetanReview.net, Sep19’20) – India reported more recoveries than new infections from the Covid-19 global pandemic on Sep 19 morning. If this becomes a trend, the country will be seen to be on its way to defeat the pandemic. However, this could also be just a one-off incident rather than an indicator of the situation in India finally taking a turn for the better.

Four states, namely Maharashtra, Andhra Pradesh, Tamil Nadu, and Karnataka have accumulated more than 500,000 cases each in that order.

Four other states/ Union Territories, namely Punjab, Chattisgarh, Jharkhand, and Jammu & Kashmir had reported more than 61,000 cases each so far in that order.

Besides, there were 10 other states/Union Territories with a total more than 1,500 cases each, namely, Chandigarh, Manipur, Arunachal Pradesh, Nagaland, Meghalaya, Ladakh, Andaman and Nicobar Islands, Dadra and Nagar Haveli, Sikkim, and Mizoram in that order. 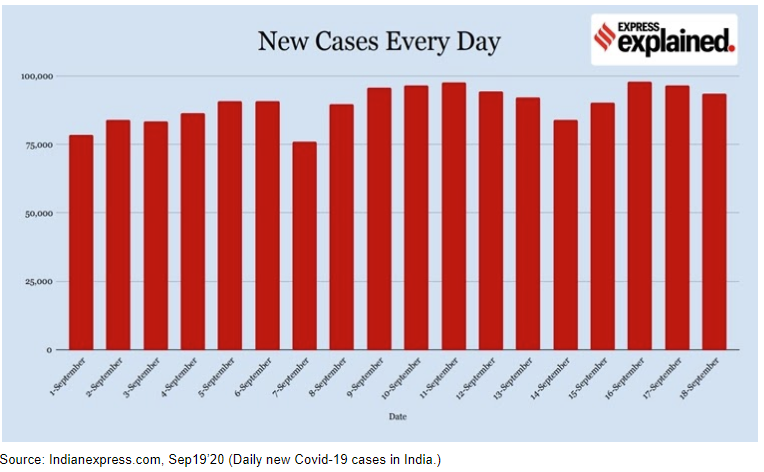 The total number of Covid-19 cases among Tibetans in India, Nepal and Bhutan had remained unchanged for the second day at 291 (↑0), of whom 171 were active, 109 had recovered and 11 had died, according to the tally of the Central Tibetan Administration as of Sep 19.