(TibetanReview.net, Sep21’20) – For the first time in at least four months of the pandemic, weekly Covid-19 cases in India had registered a fall. The drop in fresh infections, as compared with the previous week’s tally, was marginal but significant as weekly cases had till now been rising without exception since at least the first week of May, reported the timesofindia.com Sep 21.

Significantly, active cases in the country too decreased for the fourth straight day, falling from a high of 1,026,000 on Sep 17, active cases had dropped to below 1.01 million on Sep 20, the report added.

Besides, daily cases were also reported to have dropped to below 90,000 on Sep 20 for the first time in six days.

Nevertheless, it is too early and premature to speak of the Covid-19 situation in India finally taking a turn for the better. The country still has the highest number of daily new infections in the world.

Four states, namely Maharashtra, Andhra Pradesh, Tamil Nadu, and Karnataka have accumulated more than 510,000 cases each in that order.

Four other states/ Union Territories, namely Punjab, Chattisgarh, Jharkhand, and Jammu & Kashmir had reported more than 63,000 cases each so far in that order.

Besides, there were nine other states/Union Territories with a total more than 1,500 cases each, namely, Manipur, Arunachal Pradesh, Nagaland, Meghalaya, Ladakh, Andaman and Nicobar Islands, Dadra and Nagar Haveli, Sikkim, and Mizoram in that order. 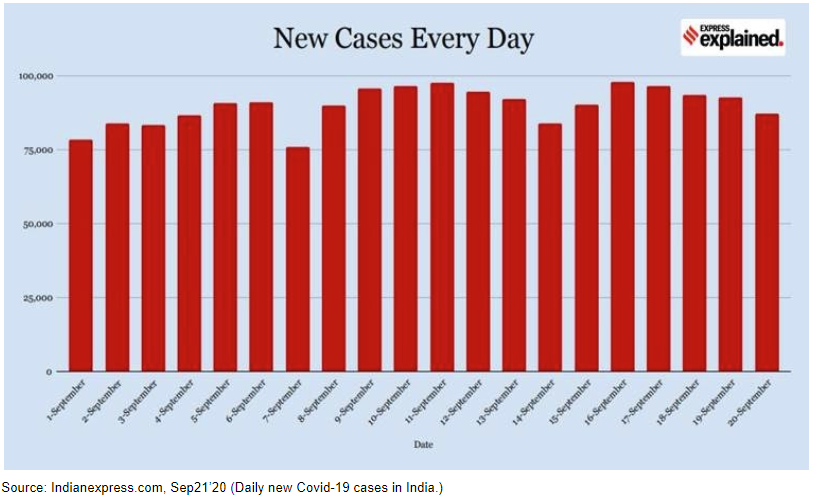 The total number of Covid-19 cases among Tibetans in India, Nepal and Bhutan had increased to 300 (↑9), of whom 180 were active, 109 had recovered and 11 had died, according to the tally of the Central Tibetan Administration as of Sep 21.