(TibetanReview.net, Nov18’20) – India saw a 32% jump in Covid-19 cases on its first day after the Diwali weekend. This, however, reflected increased testing, which finally touched 9.3 lakh after dropping to about 8 lakh over the weekend because of Diwali festivities, reported ndtv.com Nov 18.

The report also noted that on Nov 17, India’s the Health Ministry had warned that the country was yet to see the effects of laxity in following Covid-safe behaviour during the Diwali festivities and the recently concluded state elections in Bihar and bypolls elsewhere. The effects will play out over the next week to 15 days, Union Health Secretary Rajesh Bhushan was cited as saying.

Meanwhile, the Covid-19 situation in Delhi remained grim, with the latest surge leaving the healthcare system gasping for relief, reported the IANS Nov 18. The situation has forced the Delhi government to reconsider imposing market restrictions it lifted months ago.

However, over the last two days, Delhi has reported about half the numbers it had been reporting for the last two weeks. But that is most likely a result of low testing than any rapid significant decline in the spread of the disease. For the last two days Delhi has carried out less than half the tests it was doing earlier, noted the indianexpress.com Nov 18.

The number of active cases fell below five lakh for the eighth successive day after remaining below six lakh for 12 consecutive days.

They were followed by seven other states with more than 204,000 cases each and which included, Odisha, Telangana, Rajasthan, Bihar, Chattisgarh, Assam, and Haryana in that order.

Besides, there were six other states/Union Territories with a total of more than 3,000 cases each, namely, Ladakh, Andaman and Nicobar Islands, Sikkim, Mizoram, and Dadra and Nagar Haveli and in that order. 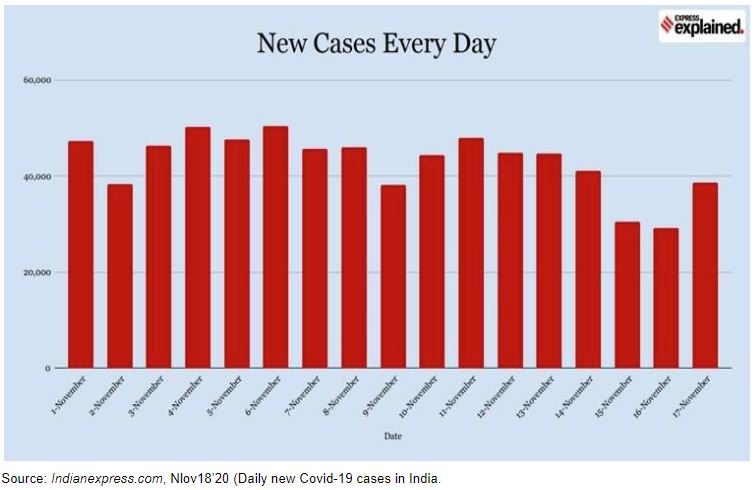 After remaining unchanged for four days, the total number of Covid-19 cases among Tibetans in India, Nepal and Bhutan had increased to 1,200 (↑35), of whom 325 were active, 846 had recovered and 29 (↑3) had died, according to the latest tally of the Central Tibetan Administration (CTA) as of Nov 17.

Meanwhile, Covid-19 cases have been reported for the first time among the staff of the CTA at its Dharamsala secretariat.

“We have detected two Covid-19 cases; one was reported from the quarantine center and another from the CTA premises,” CTA’s Health Department Secretary Mr Palden Dhondup has said Nov 17.

All the 88 CTA staff who had contact with the infected Tibet Museum staff were being tested while the offices of the CTA, except the Health Department, were set to remain closed for over a week. The staff detected with Covid-9 infection from the quarantine centre had returned from an official photography assignment in Varanasi.