(TibetanReview.net, Aug05’20) – India recorded the highest count of fresh Covid-19 cases in the world for the second day running on Aug 5 morning while also having reported its most daily deaths from the virus on Aug 4 morning even as the World Health Organisation (WHO) expressed concern that the country wasn’t testing enough, reported the timesofindia.com Aug 4 and 5.

However, in the backdrop of a rising Covid-19 graph, the number of active cases in the country decreased by 874 for the first time on Aug 3, data from state governments was cited as revealing.

The drop in active cases means there is less number of people to spread the infection. This happens when the number of recoveries and deaths is higher than fresh cases in a day. However, it remains to be seen whether the trend holds in the coming days, the report said.

This is the seventh consecutive day the number of daily new cases in India had increased by more than 50,000.

Besides, there were eleven states and Union Territories with a total more than 1,000 cases each, namely Uttarakhand, Goa, Tripura, Puducherry, Manipur, Himachal Pradesh, Nagaland, Arunachal Pradesh, Ladakh, Dadra and Nagar Haveli, and Chandigarh in that order.

Finally, there were four other states/ Union Territories with less than 1,000 cases each, namely Andaman and Nicobar Islands, Meghalaya, Sikkim, and Mizoram in that order.

Maharashtra also had the most number of deaths at 16,142 (↑300), followed by Tamil Nadu, Delhi, Karnataka, Gujarat, Uttar Pradesh, West Bengal, Andhra Pradesh, Madhya Pradesh, Rajasthan, Telangana, Punjab, Haryana, Jammu and Kashmir, Bihar, Odisha, Jharkhand, and so on in that order. 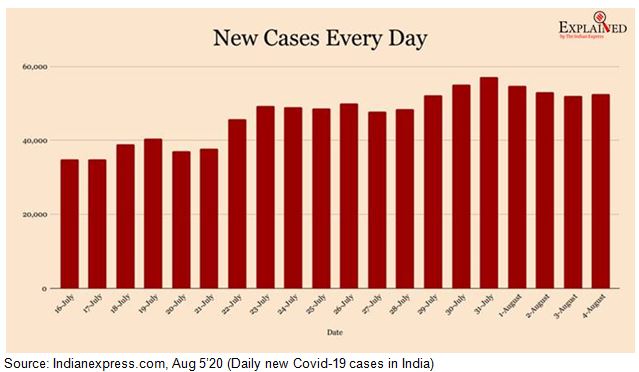