(TibetanReview.net, Aug17’20) – The Covid-19 growth rate in India of both new cases and deaths had slowed considerably in the past week, noted the timesofindia.com Aug 17. But it also said that the surge in cases as well as deaths continued over the past seven days, making it the deadliest week yet of the pandemic in the country.

The reported added that it might be too early to conclude that the Covid-19 pandemic was slowing down in the country unless this trend continues in the coming weeks.

The positivity rate, the number found to be positive out of the total of those tested, was 7.92%. The requirement for bringing the pandemic under control, according to the WHO, is stated to be 5%.

Five other states, namely Telangana, Gujarat, Assam, Rajasthan, and Odisha had reported more than 60,000 cases each so far in that order.

Besides, there were 11 other states/Union Territories with a total more than 1,000 cases each, namely Puducherry, Tripura, Manipur, Himachal Pradesh, Nagaland, Arunachal Pradesh, Andaman and Nicobar Islands, Chandigarh, Ladakh, Dadra and Nagar Haveli, Meghalaya, and Sikkim in that order.

Maharashtra also had the most number of deaths at 20,037 (↑288); followed by Tamil Nadu with more than 5,700 deaths; Delhi with more than 4,100 deaths; Karnataka with more than 3,900 deaths; Gujarat, Andhra Pradesh, Uttar Pradesh, and West Bengal with more than 2,400 deaths each; Madhya Pradesh with over 1,100 deaths; and Rajasthan, Punjab, Telangana, Jammu & Kashmir, Haryana, Bihar, Odisha, Jharkhand, Assam, Kerala, Uttarakhand, and Chattisgarh with between 876 and 141 deaths each, and so on in that order. 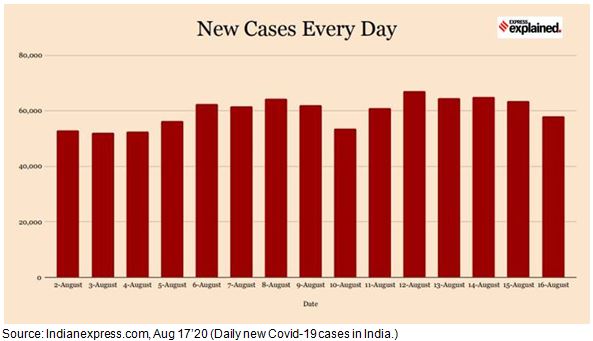 The total number of Covid-19 cases among Tibetans in India, Nepal and Bhutan stood at a total of 90 (↑2) so far, of whom 20 were active, 68 had recovered and two had died, according to the tally of the Central Tibetan Administration as of Aug 17 morning.