(TibetanReview.net, Oct26’20) – The United States reported 79,852 new Covid-19 infections on Oct 25, close to the previous day’s record of 84,244 new cases. Hospitalizations are also rising and have hit a two-month high and deaths are trending upwards, reported the timesofindia.com Oct 26, citing a Reuters tally.

In contrast, India not only reported much less daily figures but also steepest weekly fall yet. Fresh infections recorded this week (Oct 19-25) were nearly 16% less than the previous week’s tally while deaths from the virus fell by 19% during this period, noted another timesofindia.com report Oct 26.

Citing state government records, the report said India had just over 3.6 lakh fresh cases during the week, the lowest in absolute terms in three months (since 3.2 lakh were detected in the Jul 20-26 week). This marked a drop of 15.7% from the previous week’s numbers, the sharpest weekly fall in cases since the pandemic hit India, the report noted.

What is more, this was the sixth straight week of decline in fresh Covid-19 cases in India from the peak of 6,45,014 infections reported during Sep 7-13, indicating a sustained reduction in the pandemic’s spread in India.

Delhi, the nation’s capital, however, recorded more than 4,000 fresh cases for thre third consecutive day, including the highest single-day spike of 4,136 on Oct 25 in 38 days, the PTI news agency Oct 35 cited authorities as saying.

They were followed by seven other states with more than 204,000 cases each and included Kerala, Delhi, West Bengal, Odisha, Telangana, Bihar, and Assam in that order.

Six other states, namely Rajasthan, Chattisgarh, Madhya Pradesh, Gujarat, Haryana, and Punjab had reported more than 131,000 cases each so far in that order.

Besides, there were seven other states/Union Territories with a total of more than 2,400 cases each, namely Meghalaya, Nagaland, Ladakh, Andaman and Nicobar Islands, Sikkim, Dadra and Nagar Haveli, and Mizoram in that order. 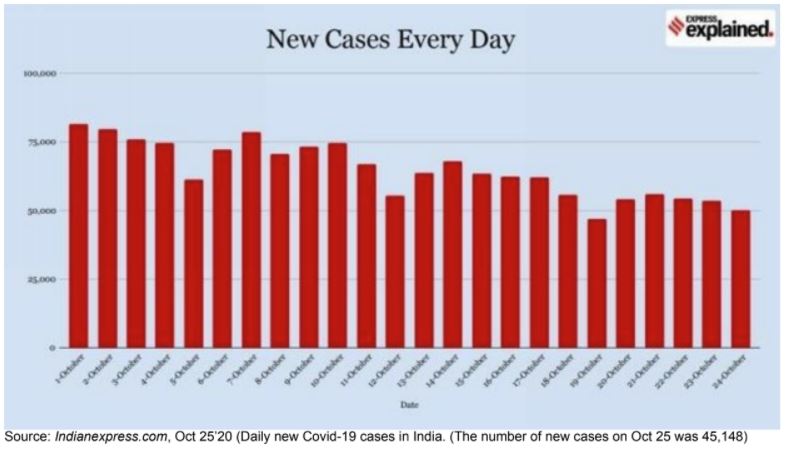 The total number of Covid-19 cases among Tibetans in India, Nepal and Bhutan had remained unchanged for the second day at 825 (↑0), of whom 428 were active, 376 had recovered and 21 (↑0) had died, according to the ;attest tally of the Central Tibetan Administration (CTA) as of Oct 26. 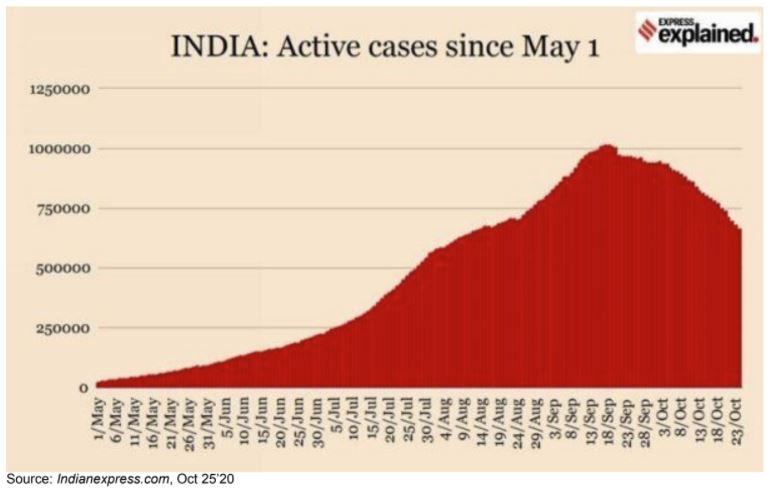