(TibetanReview.net, Sep30’20) – More than 90 per cent of Indians are still vulnerable to the Covid-19 infection because they have not yet been exposed to it, the second sero survey by the Indian Council of Medical Research (ICMR) was reported to have found Sep 29. This means there is no question of talking about India reaching herd immunity, which is seen as one way in which the pandemic could come to an end.

India continues to be the country reporting the world’s highest daily number of new Covid-19 infections. It recorded more than 2.5 million cases in September alone, accounting for 41% of its total caseload since the pandemic hit the country. The grim milestone was reached on Sep 29, when fresh cases climbed back to over 80,000 after a big drop the previous day, noted the timesofindia.com Sep 30.

Four states, namely Maharashtra, Andhra Pradesh, Karnataka, and Tamil Nadu have accumulated more than 590,000 cases each in that order.

Two other states/ Union Territories, namely Jharkhand, and Jammu & Kashmir had reported more than 74,000 cases each so far in that order.

Besides, there were eight other states/Union Territories with a total more than 1,900 cases each, namely Arunachal Pradesh, Nagaland, Meghalaya, Ladakh, Andaman and Nicobar Islands, Dadra and Nagar Haveli, Sikkim, and Mizoram in that order. 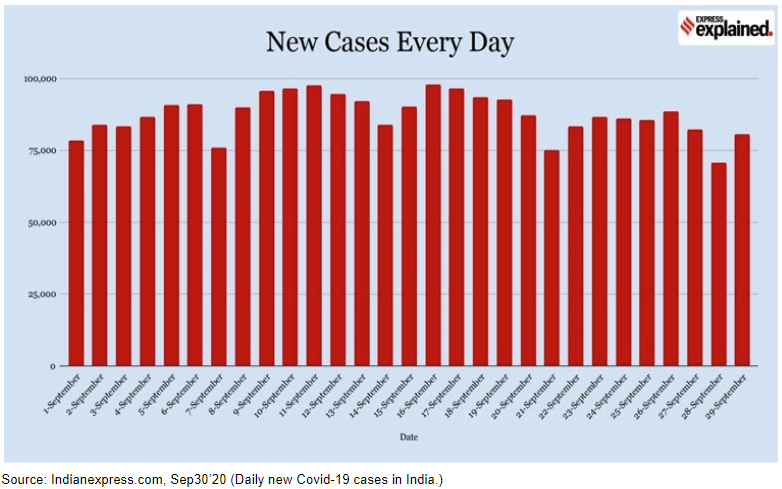 The total number of Covid-19 cases among Tibetans in India, Nepal and Bhutan had remained unchanged at 371 (↑0), of whom 161 were active, 198 had recovered and 12 had died, according to the tally of the Central Tibetan Administration as of Sep 30.