(TibetanReview.net, Sep09’20) – Late-stage studies of AstraZeneca’s Covid-19 vaccine candidate, one of the most promising one expected to hit the market before the end of this year, are on temporary hold while the company investigates whether a recipient’s “potentially unexplained” illness is a side effect of the shot. The test could resume within days if the vaccine is determined not to be the cause of the illness. The great hope is that the illness, reported in the UK, was not a side effect of the vaccine.

Late last month, AstraZeneca began recruiting 30,000 people in the US for its largest study of the vaccine. It is also testing the vaccine, developed by Oxford University, on thousands of people in Britain, and in smaller studies in Brazil and South Africa, noted the AP Sep 9. The testing was also begun recently in India, which will manufacture the vaccine if the test is successful.

Two other vaccines are in huge, final-stage tests in the United States: one being made by Moderna Inc. and the other by Pfizer and Germany’s BioNTech. Those two vaccines work differently than AstraZeneca’s, and the studies already have recruited about two-thirds of the needed volunteers, the report noted.

The need for a proven vaccine is acutely felt in all countries across the world whose economies and freedom have been severely hit by the pandemic that China unleashed on the world by brutally suppressing information about its outbreak in Wuhan city late last year.

The need for a vaccine is especially acute in India which now reports more new infections each day than any other country.

Four states, namely Maharashtra, Andhra Pradesh, Tamil Nadu, and Karnataka had accumulated more than 400,000 cases each in that order.

Nine other states, namely Utttar Pradesh, Delhi, West Bengal, Bihar, Telangana, Assam, Odisha, and Gujarat had reported more than 100,000 cases each so far in that order.

Six other states, namely, Rajasthan, Kerala, Haryana, Madhya Pradesh, Punjab, and Jharkhand had reported more than 55,000 cases each so far in that order.

Besides, there were 11 other states/Union Territories with a total more than 1,100 cases each, namely, Himachal Pradesh, Manipur, Chandigarh, Arunachal Pradesh, Nagaland, Andaman and Nicobar Islands, Ladakh, Meghalaya, Dadra and Nagar Haveli, Sikkim, and Mizoram in that order. 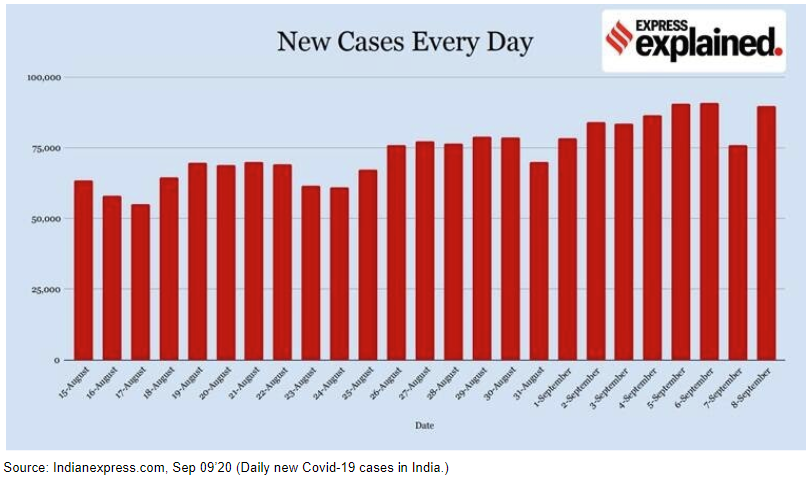