(TibetanReview.net, Aug12’20) – President Vladimir Putin of Russia has announced Aug 11 the approval of a coronavirus vaccine for general public use, calling it a “world first” and claiming one of his daughters had already taken it. But outside the country, the news has been greeted with concerns about its safety and effectiveness as the vaccine was yet to undergo its final stage trial which will only begin with its release for general public use. The country has released no scientific data on its testing and the vaccine’s claimed safety or effectiveness could not be verified, noted edition.cnn.com Aug 12.

Russia is not the only one to cut corners in testing to rush a vaccine. In June, the Chinese government approved the use of an experimental coronavirus vaccine for the country’s military.

Russia has claimed that it has received preliminary applications for over 1 billion doses of the vaccine from 20 countries. This, if true, is understandable, given the desperation of countries to overcome the enormous health crisis and the economic havoc this China-unleashed pandemic has wreaked on them.

The Covid-19 pandemic has currently infected nearly 20.3 million people and killed more 741,000 people across the world and a fully tested and approved vaccine is not expected to hit the market before the end of this year.

India accounted for over 23% of the cases and more than 15 per cent of the deaths recorded worldwide from Aug 4 to 10, reported the PTI Aug 11. Citing WHO data, the report added that for the past seven days, India’s single-day count of Covid-19 cases had been more than that of the US and Brazil, the two worst-hit nations in terms of infections.

This was the 14th consecutive day the number of daily new cases in India increased by more than 50,000.

Five other states, namely Bihar, Telangana, Gujarat, Assam, and Rajasthan had reported more than 50,000 cases each so far in that order.

Besides, there were 12 other states/Union Territories with a total more than 1,000 cases each, namely Goa, Tripura, Puducherry, Manipur, Himachal Pradesh, Nagaland, Arunachal Pradesh, Ladakh, Andaman and Nicobar Islands, Dadra and Nagar Haveli, Chandigarh, and Meghalaya in that order.

Finally, there were two other states with less than 1,000 cases each, namely Sikkim and Mizoram in that order. 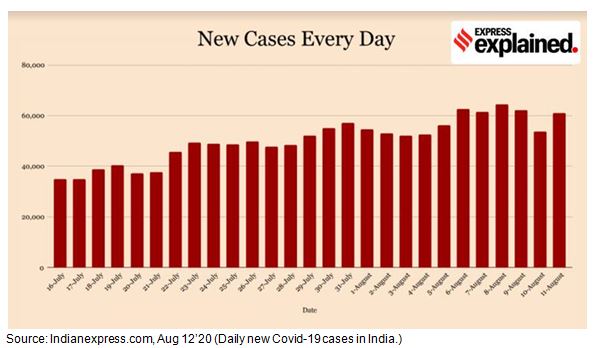 The total number of Covid-19 cases among Tibetans in India, Nepal and Bhutan stood unchanged at a total of 86 (↑0) so far, of whom 18 were active, 66 had recovered and two had died, according to the tally of the Central Tibetan Administration as of Aug 12 morning.