(TibetanReview.net, May23’20) – Another drawn out standoff appears to be brewing between India and China across the Ladakh-Tibet border with the former’s People’s Liberation Army (PLA) blocking the latter’s Army patrols on its side of the Line of Actual Control (LAC). The development comes in the backdrop of two separate incidents that took place at the Sikkim and Ladakh sectors, where Indian and Chinese soldiers came to exchange of blows earlier this month. Underlying it remains China’s intolerance of India’s development of infrastructure on its side of the border, something China had long carried out on occupied Tibet’s side.

The two countries had opened military and diplomatic channels to resolve the issue but there had been no breakthrough so far, reported timesnownews.com May 21.

“Flag meetings” and “military hotline talks” were reported to be taking place at multiple-levels with the field commanders of the PLA to de-escalate the tensions amid troop build-ups from both sides along the LAC.

There is no common perception even of the LAC between the two sides. The border did not need to be demarcated earlier when Tibet was free of Chinese rule and people from the two sides moved freely into each other’s territories. 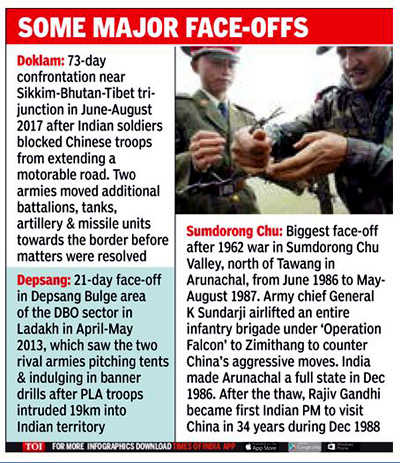 Both the sides were stated to have strengthened their troop presences as talks continued without achieving a breakthrough.

China was reported to be deeply suspicious and raising objections whenever India started developing border infrastructures like roads, defences and advanced landing grounds on the western and eastern sectors of the LAC.

The report noted that the completion of the 255-km Darbuk-Shyok-DBO road last year, which provides access to the Depsang area and Galwan Valley in Ladakh while ending near the Karakoram Pass had infuriated Beijing.

Tension was reported to be brewing between the two sides since mid-April, which led to violent clashes on May 5-6, with both India and China bringing in additional troops and starting to build fortifications and pitching tents along the LAC in eastern Ladakh.

China was also reported to have increased the number of its armed motorised boats for patrolling in the 134-km long Pangong Tso lake which demarcates the border between Ladakh in India and Chinese ruler of Tibet.

The United States on May 20 accused China of engaging in “provocative and disturbing behaviour”.

The border brawls were “a reminder that Chinese aggression is not always just rhetorical. Whether it is in the South China Sea or along the border with India, we continue to see provocations and disturbing behaviour by China that poses questions about how China seeks to use its growing power,” timesofindia.com May 21 quoted Alice Wells, the outgoing acting assistant secretary of state, as telling journalist.

“It has to be resisted,” Wells was quoted as saying. 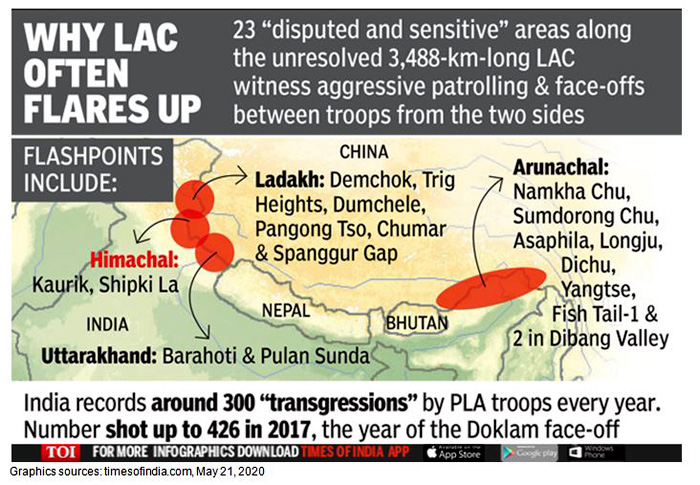