(TibetanReview.net, Sep25’20) – More Covid-19 cases were detected in India on Sep 24 than the number of people declared to have recovered from the pandemic disease, ending a six-day streak that had raised hopes of a possible slowdown in the spread of the disease, reported the Indianexpress.com Sep 25. But it was more a case of recoveries dropping down, rather than discovery of new cases going up by any significant amount, the report noted.

This happened in the backdrop of the testing numbers touching a new high on Sep 24, with almost 1.5 million samples being tested.

The report also said there had been a general slowdown in the spread of coronavirus cases in the country, as suggested by the falling growth rates, which had dropped to below 1.6 per cent per day now, from a level of 3 per cent at the end of June.

Four states, namely Maharashtra, Andhra Pradesh, Tamil Nadu, and Karnataka have accumulated more than 540,000 cases each in that order.

Three other states/ Union Territories, namely Chattisgarh, Jharkhand, and Jammu & Kashmir had reported more than 68,000 cases each so far in that order. 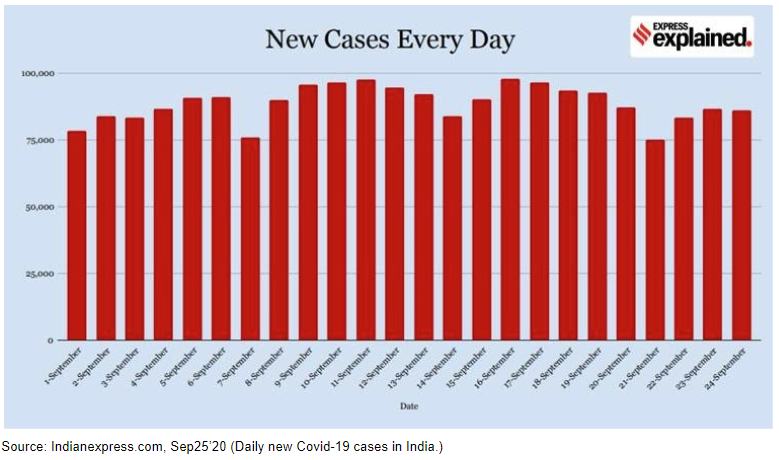 The total number of Covid-19 cases among Tibetans in India, Nepal and Bhutan had increased to 357 (↑37), of whom 147 were active, 198 had recovered and 12 had died, according to the tally of the Central Tibetan Administration as of Sep 25.