(TibetanReview.net, Nov20’20) – India has on Nov 20 morning reported more number of new Covid-19 cases than recoveries over the past 24 hours, resulting in a slight increase in active cases for the first time after 47 days, noted the indianexpress.com Nov 20.

The total number of infections in the country also crossed the 9 million mark, which made India the second country to do so after the USA whose total is more than 11.7 million.

India’s latest 24-hour tally of more than 46,000 was the highest in 8 days, in part due to a rise in testing that had fallen sharply in recent days, the report noted.

However, the last one-million rise in 22 days meant the spread in the country had halved since the pandemic’s peak in mid-September, when it took just 11 days for cases to go from four million to five million. Only the first one million cases took more days than the last million, the report added.

The number of active cases fell below five lakh for the 10th successive day after remaining below six lakh for 12 days.

India’s Covid-19 tally had earlier crossed the 2 million mark on Aug 7, 3 million on Aug 23 and 4 million on Sep 5, noted the timesofindia.com Nov 19.

They were followed by seven other states with more than 209,000 cases each and which included, Odisha, Telangana, Rajasthan, Bihar, Chattisgarh, Assam, and Haryana in that order.

Besides, there were five other states/Union Territories with a total of more than 3,000 cases each, namely, Ladakh, Sikkim, Andaman and Nicobar Islands, Mizoram, and Dadra and Nagar Haveli and in that order. 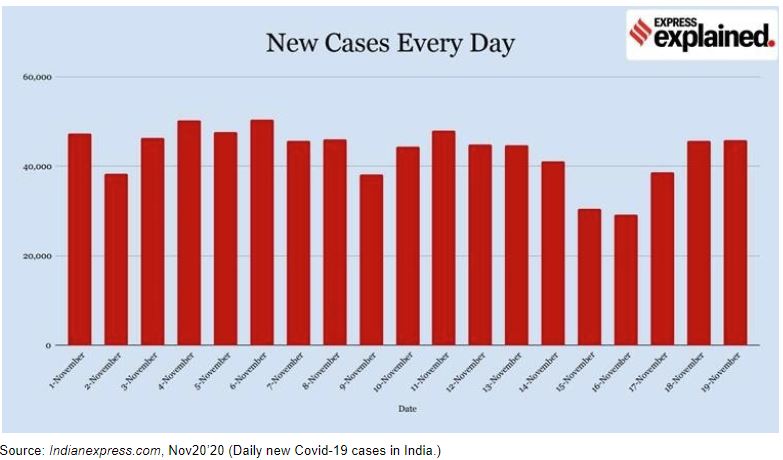 After remaining unchanged for five days, the total number of Covid-19 cases among Tibetans in India, Nepal and Bhutan had increased to 1,230 (↑30), of whom 285 were active, 916 had recovered and 29 (↑0) had died, according to the latest tally of the Central Tibetan Administration (CTA) as of Nov 20.

Addressing a press briefing, the CTA’s Cvoid-19 task force has said Nov 20 that there had been 65 new cases among TBieans in India and Nepal over the past week. They included 17 from Ladakh; 13 from Mundgod; 7 from Dharamsala; 4 each from Bylakuppe and  Chauntra; 3 from Puruwala; 2 each from Dekyiling and Hunsur; 1 each from Clement town, Lingtsang, Lakhanwala and Paonta; and 8 from Kathmandu, Nepal. Thiry of them were stated to be symptomatic.