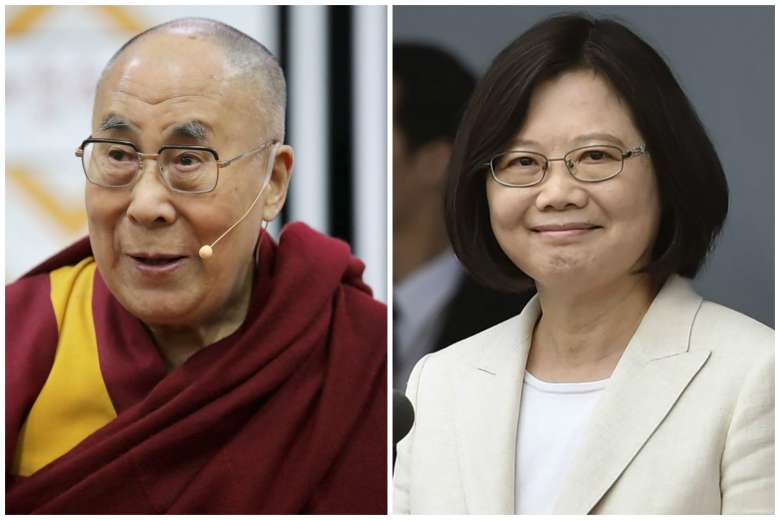 (TibetanReview.net, May24’19) – Pressure has been sought to be brought on Taiwan’s current president Tsai Ing-wen to invite Tibet’s exiled spiritual leader, the Dalai Lama, given that all her directly elected predecessors had done so, reported taipeitimes.com May 24.

The challenge has been made by the Taiwan Jury Association and political advocates May 23, querying whether President Tsai had been stopped by her “fear of China”.

“Why can the Dalai Lama not visit Taiwan now? President Tsai, is it because of your cowardice and fear of China?” association founder Jerry Cheng was quoted as saying at a news conference in Taipei.

While Taiwan often does not receive focused media attention on the world stage, it can certainly “put more effort into human rights and other important international issues by forging a stronger alliance with Tibet and the Uighur people of East Turkestan,” Cheng was quoted as saying.

He has said such endeavours also link Taiwan with North American and European nations. “These can create greater visibility for us and highlight the fact that Taiwan is a sovereign and independent country.”

Other association members were reported to have urged the government to issue the invitation quickly as the Dalai Lama was growing older and has been less able to undertake long journeys.

The report pointed out that the Dalai Lama had visited Taiwan in 1997, 2001 and 2009 during the presidencies of Lee Teng-hui, Chen Shui-bian, and Ma Ying-jeou.

The report cited Taiwanese National Congress convener Ted Lau as saying most Taiwanese had a distorted view of Tibetan history from the former KMT educational system and Beijing.

“Tibet was never a part of China and the Republic of China [ROC] never had administrative power over Tibet,” Lau has said. “Therefore, Tsai as our nation’s leader should announce to the world that Tibet, and also Mongolia, are not territories of the ROC.”

China’s mind game on Tibetans a flop, Dalai Lama to visiting US official on Tibet issues