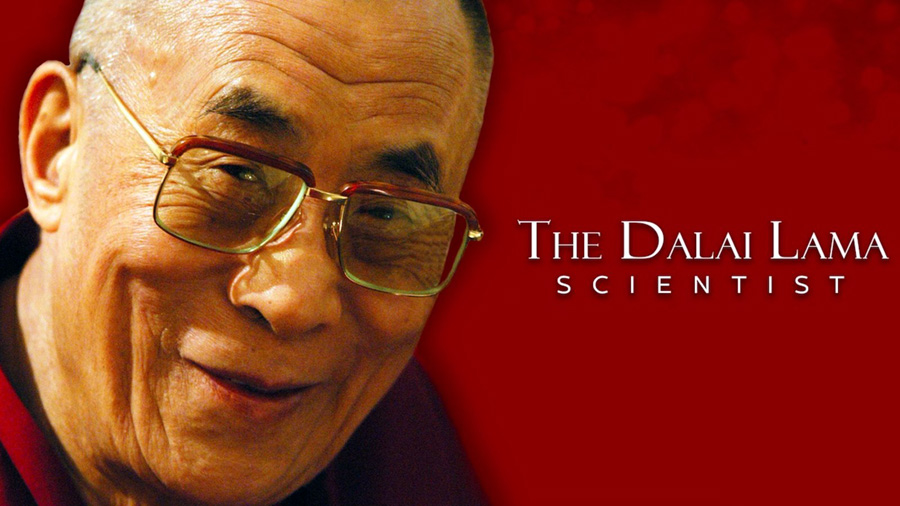 The documentary ‘The Dalai Lama-Scientist’, written and directed by the six-time Nobel prize nominee Dawn Engle, is about His Holiness the Dalai Lama’s keen interest in Science and its relationship with what the historical Buddha’s message had to offer in understanding some of the most fundamental questions mankind had faced over the centuries – origination of our universe, the fundamental nature of the objects we see around and our consciousness, among others. While tackling these queries, the film addresses the nature of the universe through cosmology and quantum physics. It also explores the nature of our mind through cognitive science/psychology, neuroscience, molecular biology, and genetics.

The scientists are not only puzzled but also intrigued by some of the most profound questions put forth by His Holiness while addressing various scientific theories with his in-depth knowledge of Buddhism. Amisha Jha, a neuroscientist, is surprised to hear His Holiness, who had no clue on her subject matter, speaking on par with one of her cognitive neuro researches that took almost seventy years to resolve. While referring to Buddhism, she even declared that there is a whole other goldmine of thought to lean on when it comes to formulating questions on Cognitive Science.

His Holiness’s inquisitive mind has never kept him afar from asking questions on the various natural events unfolding in front of his eyes while growing up in Tibet as a little monk. The young monk even proved that the moon did not give light on its own by showing its surface’s directional shadow pattern to his tutors through a telescope mounted on top of the Potala Palace in Lhasa. “I would be either an engineer or an electrician if I were not to become a monk.” asserted His Holiness.

After coming into exile in India and over the course of the last more than 28 years, His Holiness initiated a series of dialogues with some of the eminent scientists such as Arthur Zajonc, Richard J. Davidson, Daniel Goleman, and others including luminaries in various fields in Dharamsala, India, his exile home under the aegis of his not-for-profit organization Mind & Life Institute. It is almost unheard of that scientists who go by rationality and questioning remain close professionally and become good friends with a religious leader for such a long time. The passing away of one of his oldest scientist friends, Francisco Varela, and His Holiness’s initiative in immortalizing his old friend by keeping pictures nearby at all the time, is particularly sad as well as heart-warming. This is one example of how deep his friendship with these scientists has developed over the years.

One may feel that the filmmaker Dawn’s intention is all about proving how relevant Buddhism is to Science as a religion. Interestingly, these two traditions are similar and intertwined to such an extent that we can’t separate one from the other, if at all, and for that matter, there is no need to prove their closeness in the first place. It would be far more challenging to make a film on their dissimilarity than the similarity if I were to make a film on the subject. For instance, the concept of the never-ending cycle of the big bang and its contraction is in perfect tune with the core teaching of the Buddha’s samsara, which is also a beginningless as well as an endless phenomenon. The particle and wave duality nature of all the objects we see around at their sub-atomic level further cemented Buddhism’s concept of non-existent of the object’s intrinsic nature as such. There is also overwhelming proximity when it comes to how our cognitive behaviour and brain wiring are intertwined. It is surprising to learn how both affect one another, which is agreed upon by the two traditions. In laymen’s terms, while our thought processes (brain wiring) produces actions, the vice versa is also happening at the same time, which opens up unlimited possibilities to change our behaviour and response with our environments.

The film also offers some amusing anecdotes. For instance, Aaron Beck, the father of cognitive-behavioural therapy, shares a story of a depressed scientist who missed the Nobel Prize for one of his achievements in science with His Holiness. When Aaron asked the scientist how vital the award is to him, the scientist answered, “Everything.” He then asked how important his kids were to him, the scientist wept as he missed his kids. In fact, he remembered his childhood days where his father was always busy working on his physics projects and had no time to play with him when he was a boy. When Aaron told the audience the scientist no longer experienced depression after that episode, everyone burst into laughter. Another beautiful episode is when Michel Bitbol, a philosopher of science, discusses the concept of the famous of Schrodinger’s cat experiment with the audience. In between, one of the nearby scientists interjected to remind HH that it was only a thought experiment in quantum mechanics, and it didn’t involve the actual killing of a cat, which is not only hilarious but also profound as compassion is drawn into it out of nowhere.

However, let me also warn you that for those who have the least interest in science, the film may be quite challenging to watch as it doesn’t have the three-act structure as such. Yes, it is more of an academically oriented film. However, for those who are a science and spiritually enthusiast, it is a pure gem that addresses many aspects of their quests.

The one hour thirty-four min long film is now available on Vimeo, and you can also choose to watch from seven different languages. https://vimeo.com/ondemand/thedalailamascientist/368537018

* Tashi Wangchuk is a Washington DC-based independent filmmaker and TV producer whose earlier works include three feature-length films: My Son Tenzin, Richard Gere is My Hero, & Phun Anu Thanu, besides India’s Doordarshan-commissioned film Democracy in Exile among others.

Dalai Lama book on compassionate revolution for protecting our planet, its inhabitants set for release