(TibetanReview.net, Jun16’20) – Three Indian soldiers, including an officer, have died in a clash with Chinese soldiers in the night of Jun 15 during their withdrawals to de-escalate a six-week border standoff on the Ladakh-Tibet border. The clash was said to have involved the use of rods and stones and it was not clear whether there was any serious injury on the Chinese side.

“During the de-escalation process underway in the Galwan Valley, a violent face-off took place yesterday night with casualties. The loss of lives on the Indian side includes an officer and two soldiers. Senior military officials of the two sides are currently meeting at the venue to defuse the situation,” the scmp.com Jun 16 quoted the Indian army as saying in a statement.

The incident was stated to have taken place at Ladakh’s Galwan Valley.

China has accused India for the violence.

“Our border troops had a high-level meeting and reached important consensus on easing the border situation but astonishingly on Jun 15 the Indian troops seriously violated our consensus and twice crossed the border line for illegal activities and provoked and attacked Chinese personnel which led to serious physical conflict between the two sides and China has lodged strong protest and representation with the Indian side,” timesofindia.com Jun 16 quoted China’s Foreign Ministry spokesman Zhao Lijian as saying.

This was the first fatality along the border between India and Chinese occupied Tibet since 1975 when an Indian patrol was ambushed and four of its soldiers were killed by Chinese soldiers at Tulung La in Arunachal Pradesh, the report said.

The Indian army has said there were injuries on both the sides during the latest clash, although China has not acknowledged it on its side.

The dead Indian officer was stated to be a colonel.

Tensions between the two armies have been running high on the border since reports of a scuffle between soldiers of the two sides at Pangong Tso (eastern Ladakh) and Naku la (in Sikkim) occurred early last month. Both the armies then mobilized and deployed a large number of soldiers and heavy military equipment along the Line of Actual Control (LAC).

The two sides are engaged in a standoff at Pangong Tso, Galwan Valley, Demchok and Daulat Beg Oldie in eastern Ladakh. 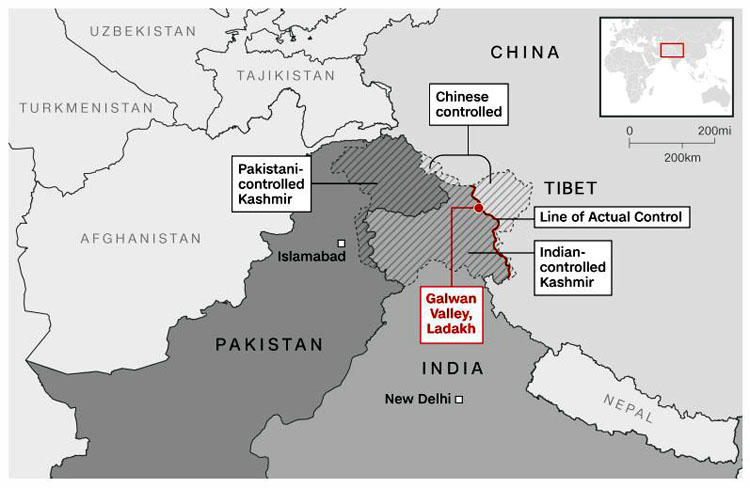