(TibetanReview.net, May14, 2018) – China said May 13 that its researchers were digitalizing ancient Tibetan manuscripts that were taken overseas from the famed Mogao Grottoes in Dunhuang, Gansu Province, a century ago. Launched by Northwest Minzu University in Gansu Province in 2013, the digitalization programme has converted 11 volumes of photocopied ancient Tibetan literature into electronic files, with a database being built, reported China’s official Xinhua news agency May 13.

The report said the university had purchased the photocopied manuscripts from libraries in Britain and France where the original documents were housed.

The report said the university had compiled and published 31 volumes from the photocopies of ancient Tibetan literature since 2005, with the figure set to increase to 45 in the following two to three years.

The Dunhuang manuscripts were discovered in the Mogao Grottoes in Gansu in 1900. While there are more than 60,000 of them, featuring history, politics, religion and folk customs, only a small part of it is in Tibetan. 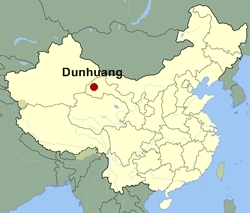 “Among the Dunhuang literature, over 10,000 pieces were written in the ancient Tibetan language.” Tsering, a professor with the university’s institute of overseas ethnic literature, was quoted as saying. “These documents cover history, ethics, law, translated works, Buddhist texts and others. They offer important material for researchers to study the society, economy and multi-ethnic cultural exchange in Dunhuang at the time.”

The report noted that the Mogao Grottoes, a UNESCO World Heritage Site, featured a huge collection of Buddhist art, including more than 2,000 colored sculptures and 45,000 square metres of frescoes spread over 735 caves.