(TibetanReview.net, Oct18’20) – Latest reports show that after recording the highest number of daily Covid-19 infections in the world for more than two months, India may finally be passing the baton back to the US, according to the timesofindia.com Oct 18. For two days running, on Oct 15 and 16, the US reported more daily cases than India, which had been logging the highest single-day counts in the world since Aug 6, the report said.

The report said it was after 71 days that the US again posted the highest daily tally in the world on Aug 15. During these 71 days, India held the top position.

Meanwhile in India, a government-appointed scientific committee has said the Covid-19 epidemic seemed to have peaked in the country and was now on the decline, and was likely to run its course by Feb 2021, reported the indianexpress.com Oct 18.

The committee, headed by Professor M Vidyasagar of IIT Hyderabad, has said, using computer models to map the trajectory of the pandemic, that the pandemic was likely to have peaked in the middle of September, and the total number of infections in India was unlikely to exceed 10.6 million. So far, 7.5 million people in India have been infected, of which nearly 6.6 million had recovered.

Four states, namely Maharashtra, Andhra Pradesh, Karnataka, and Tamil Nadu have accumulated more than 680,000 cases each in that order.

Seven other states, namely Uttar Pradesh, Kerala, Delhi, West Bengal, Odisha, Telangana, and Bihar had more than 200,000 each in that order.

Seven other states, namely, Assam, Rajasthan, Madhya Pradesh, Chattisgarh, Gujarat, Haryana, and Punjab had reported more than 120,000 cases each so far in that order.

Three other states/ Union Territories, namely Jharkhand, Jammu & Kashmir, and Uttarakhand had reported more than 57,000 cases each so far in that order. 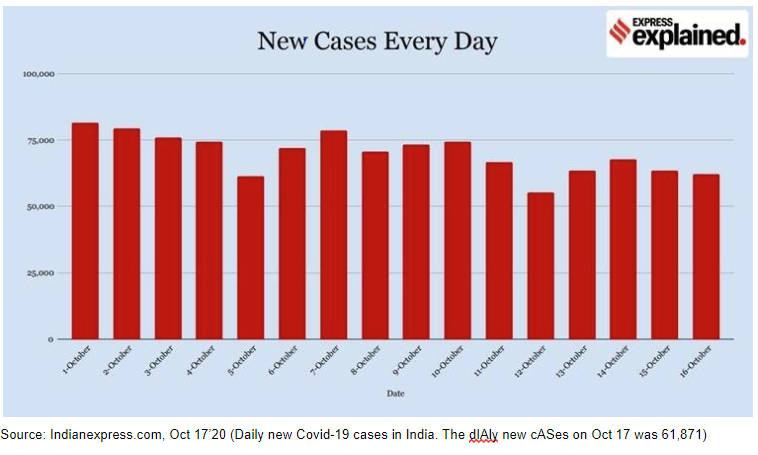 The total number of Covid-19 cases among Tibetans in India, Nepal and Bhutan had remained unchanged for the second day at 703 (↑0), of whom 410 were active, 276 had recovered and 17 (↑0) had died, according to the tally of the Central Tibetan Administration (CTA) as of Oct 18.