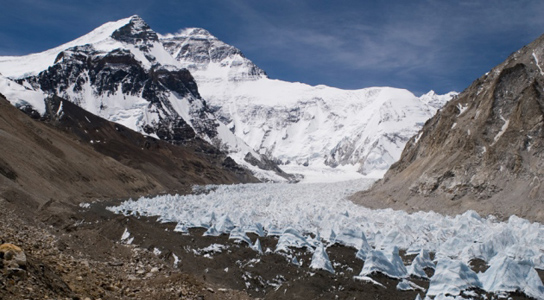 (TibetanReview.net, Sep08, 2018) – Thanks to rising temperature, estimated at a rate twice the global average in recent times, glaciers on the Tibetan Plateau and neighbouring regions have shrunk by 15 percent in the past half a century, reported China’s official Xinhua news agency Sep 6, citing a researcher. This is seen to be likely also to affect the growth of highland barley, the staple diet crop for most Tibetans.

Besides, the area of the permafrost had shrunk by 16 percent, the report cited Yao Tandong, chief scientist of China’s second comprehensive scientific expedition to the Tibetan Plateau, as saying while releasing on Sep 5 the initial expedition discoveries.

Yao, an academician with the Chinese Academy of Sciences (CAS), has said the melting glaciers had expanded lakes and increased water flows in rivers originating from the area. As a result, the number of lakes larger than one square kilometre had increased to 1,236 from 1,081, he has said.

According to Yao, higher temperatures had brought more water resources, but had also broken the earlier balance on the plateau, resulting in more frequent natural disasters, including glacier collapses.

The report cited Piao Shilong of the Institute of Tibetan Plateau Research with CAS as saying the vegetation on the plateau was contributing to the absorption of between 15 and 23 percent of land carbon in the PRC. However, he has added, the melting permafrost could release previously trapped carbon, thus further worsening climate warming.

Piao has said climate warming could also affect the growth of highland barley, a major crop on the Tibetan Plateau.

“It’s an important and urgent task in the future for the local agricultural sector to address challenges from climate warming,” he was quoted as saying.