(TibetanReview.net, Oct17’20) – There have been at least 8,008,402 cases of coronavirus in the United States so far while concern is mounting in Europe as countries smash records for daily coronavirus cases, reported the edition.cnn.com Oct 16 and 17 while India, still the country reporting the world’s highest daily number of new cases, has seemingly curved its infections graph.

Countries in Europe that managed to contain infection rates through spring lockdowns and began relaxing measures were watching the virus return with a vengeance, with Germany, France and the Czech Republic all reporting record case numbers in the past two days, noted the Oct 16 report.

Meanwhile in the sharpest fortnightly dip in cases and deaths, India saw an 18% fall in new infections from the previous 15-day period while deaths fell by nearly 19% in the first half of October, reported the timesofindia.com Oct 17.

Both the case count and the number of deaths had peaked in the first half of September. In that fortnight, the country had recorded 13,31,660 fresh infections (a 28.7% rise over the previous fortnight) and 16,641 deaths, up 15.4% from the previous 15 days, the report noted.

The pandemic is clearly on the wane, but with more than 1 million new cases and over 13,000 deaths during the fortnight, the Covid crisis in India seems far from over, the report noted.

And mirroring the fall in numbers, active cases in the country dipped below the 8-lakh mark on Oct 16 for the first time since Aug 31, the report noted. This level of active cases previously existed around the end of August, noted the indianexpress.com Oct 17. 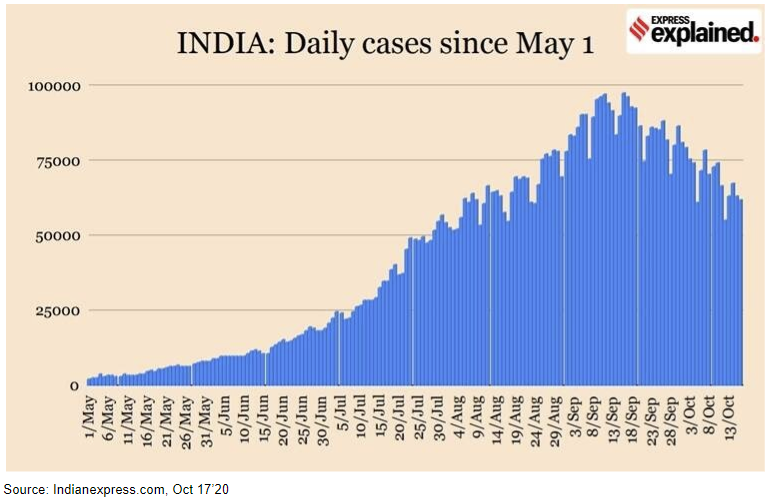 The country has been recording less than 75,000 new infections daily for the nine consecutive day and fatalities below 1,000 for 13 straight days.

Four states, namely Maharashtra, Andhra Pradesh, Karnataka, and Tamil Nadu have accumulated more than 670,000 cases each in that order.

Seven other states, namely Uttar Pradesh, Kerala, Delhi, West Bengal, Odisha, Telangana, and Bihar had more than 200,000 each in that order.

Seven other states, namely, Assam, Rajasthan, Madhya Pradesh, Gujarat, Chattisgarh, Haryana, and Punjab had reported more than 120,000 cases each so far in that order.

Three other states/ Union Territories, namely Jharkhand, Jammu & Kashmir, and Uttarakhand had reported more than 57,000 cases each so far in that order. 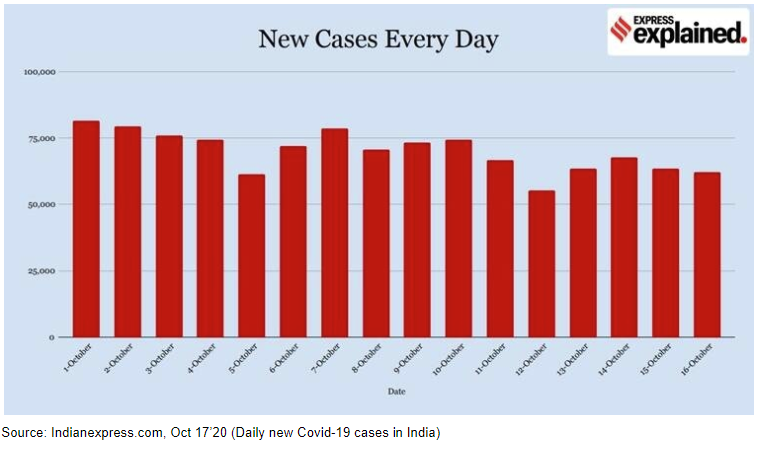 The total number of Covid-19 cases among Tibetans in India, Nepal and Bhutan had remained unchanged at 703 (↑0), of whom 410 were active, 276 had recovered and 17 (↑0) had died, according to the tally of the Central Tibetan Administration (CTA) as of Oct 17.