(TibetanReview.net, Oct16’20) – Active Covid-19 cases in India have remained below 9 lakh for the eighth day. However, India still accounts for the highest number of daily new cases even as it continues to report improving recovery and falling fatality rates. Tibetan cases in India and Nepal have increased by 168 during the past week.

The country has been recording less than 75,000 new infections daily for the eighth consecutive day and fatalities below 1,000 for 13 straight days.

Four states, namely Maharashtra, Andhra Pradesh, Karnataka, and Tamil Nadu have accumulated more than 670,000 cases each in that order.

Seven other states, namely Uttar Pradesh, Delhi, Kerala, West Bengal, Odisha, Telangana, and Bihar had more than 200,000 each in that order.

Seven other states, namely, Assam, Rajasthan, Madhya Pradesh, Gujarat, Chattisgarh, Haryana, and Punjab had reported more than 120,000 cases each so far in that order.

Three other states/ Union Territories, namely Jharkhand, Jammu & Kashmir, and Uttarakhand had reported more than 56,000 cases each so far in that order. 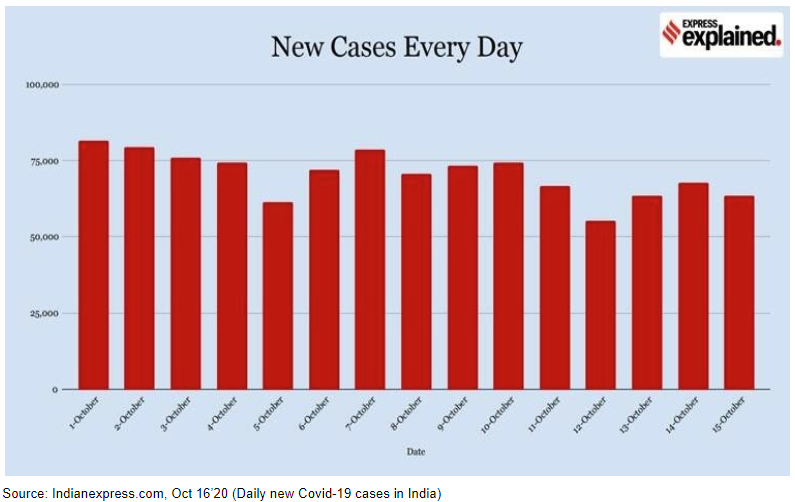 The CTA said on its Tibet.net website Oct 16 that 168 new Tibetan Covid-19 infections had been reported this week across India and Nepal (136 from India and 32 from Nepal).

Those reported from India included 91 from Mundgod, 22 from Ladakh, 6 from Bylakuppe, 5 from Mainpat, 4 from Paonta; 1 from Dehradun, 2 from Delhi, 2 from Miao, 1 from Hunsur, 1 from Kollegal and 1 from Bangalore. Those reported from Nepal were stated to be all from Kathmandu and Pokhara.