(TibetanReview.net, Sep27’20) – The seven-day average of daily Covid-19 cases in India had been steadily falling for nine consecutive days from Sep 17 to Sep 26, the first time such a phase of continuous decline has been witnessed since the beginning of the outbreak, noted the timesofindia.com Sep 27. Even more hearteningly, this was despite the seven-day average of tests having increased from 1.07 million on Sep 17 to 1.12 million on Sep 25, the last date for which data is available, it added.

The report also noted, however, that other countries had experienced steady rises in cases after long stretches of continuous falls. On the other hand, the report also cited countries where no second wave had been witnessed.

Whatever may be the case, India is still the country reporting the highest daily number of new infections and its cumulative total has been continuing to narrow with the USA, the country with the world’s highest total number of cases.

With more than 88,000 new cases reported on Sep 27 morning, India’s total is set to cross the 6 million mark next morning, with the US’s current total being over 7 million.

Four states, namely Maharashtra, Andhra Pradesh, Tamil Nadu, and Karnataka have accumulated more than 560,000 cases each in that order.

Two other states/ Union Territories, namely Jharkhand, and Jammu & Kashmir had reported more than 71,000 cases each so far in that order.

Besides, there were eight other states/Union Territories with a total more than 1,800 cases each, namely Arunachal Pradesh, Nagaland, Meghalaya, Ladakh, Andaman and Nicobar Islands, Dadra and Nagar Haveli, Sikkim, and Mizoram in that order. 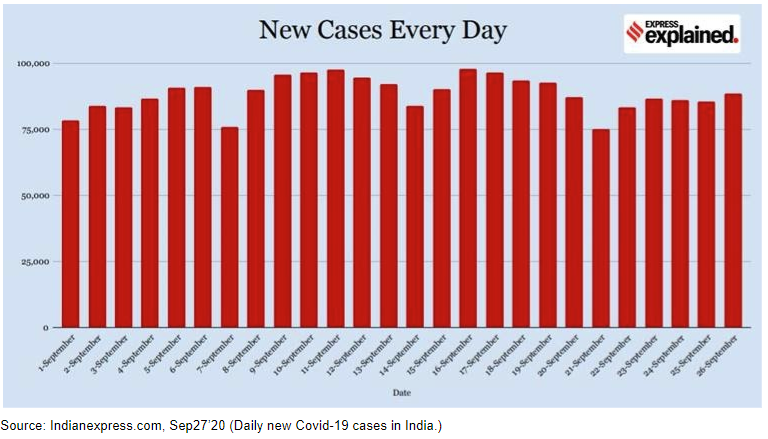 The total number of Covid-19 cases among Tibetans in India, Nepal and Bhutan had remained unchanged for the second day at 357 (↑0), of whom 147 were active, 198 had recovered and 12 had died, according to the tally of the Central Tibetan Administration as of Sep 27.