(TibetanReview.net, Apr30’20) – A total of 81,066 people had been infected and 10,403 killed in 185 countries and regions by the China-originated Covid-19 pandemic over the past 24 hours as of Apr 30 at 3:02:25 PM (GMT-4), according to the Dashboard maintained by the Center for Systems Science and Engineering (CSSE) at Johns Hopkins University. The US has nearly a third of the global cases and more than a third of the deaths, while Great Britain has just become the country with the third highest number of deaths with a total of more than 26,100 fatalities. In India, the country with the 16th highest number of cases, the daily number of cases and deaths were relatively less compared to that in the previous 24-hour period.

US President Donald Trump has doubled down on holding China responsible for failing to tame the pandemic at its origin, saying it had led to 184 countries “going through hell.” Leaders of the US, the UK and Germany believe that the deaths and the destruction of the global economy could have been avoided had China shared information about the virus in its early phases, reported News18.com Apr 29. 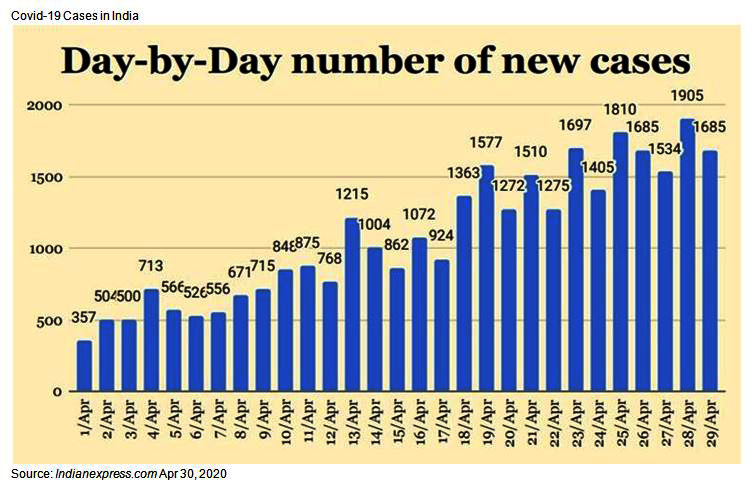 When the lockdown ends on May 3, there will be “considerable relaxations” in many districts, said the government of India on Apr 29.

“New guidelines to fight Covid-19 will come into effect from 4th May, which shall give considerable relaxations to many districts. Details regarding this shall be communicated in coming days,” Indianexpress.com Apr 30 quoted the Union Home Ministry as saying.

The Ministry has also issued guidelines for movement of stranded migrant labourers, students and tourists seeking to return home, including in other states. This will not apply to those in hotspots or containment zones.

India’s Health Ministry was reported to have identified 129 of the country’s 736 districts as hotspots.

Himachal Pradesh became the first state to effectively undertake an Active Case Finding (ACF) campaign which had helped in screening the state’s entire population of seven million for any Influenza like symptoms, reported tribuneindia.com Apr 29.

The state had a total of 40 cases, of which only 10 now remain active.

“Had it not been for the over two dozen cases linked to the Tablighi Jamaatis, Himachal would not have had so many cases,” Chief Minister Jai Ram Thakur was quoted as saying.

However, the return in the past three days of some 23,000 Himachal residents stranded in other states after the imposition of the nationwide lockdown on Mar 24 allowed by the state government remains a concern. Many were stated to have not adhered to the mandatory safety protocol, including the mandatory screening and reporting their arrival for purpose of home quarantine.