(TibetanReview.net, Mar26’20) – China’s foreign minister Wang Yi told his Indian counterpart S Jaishankar in a phone conversation On Mar 24 that their two countries should support each other and jointly safeguard global public health, suggesting that the latter should not refer to the raging Covid-19 global pandemic by its Chinese origination, reported livemint.com Mar 25.

The report noted that in the middle of a diplomatic spat between the US and China over the labeling of the Coronavirus as the “China virus”, Wang had reached out to India with the hope that New Delhi would not support such a classification.

The report cited Chinese ambassador in New Delhi, Sun Weidong, as saying Jaishankar had agreed with Wang Yi’s suggestion. However, this was not clear from Jaishankar’s own remarks on the conversation.

“China is ready to share our experience, provide assistance within our capacity and open its channel for procurement to India,” Sun was quoted as saying in the first of a series of Twitter posts on Mar 24.

Sun had said Jaishankar thanked China for its sympathy message and assistance of medical materials to India.

The report noted, however, that in his Twitter post, Jaishankar only stressed that “Global challenges require global cooperation” without any mention of having agreed with Wang on his views of avoiding stigmatising China.

The report quoted Jaishankar’s tweet, posted on Mar 24, as saying, “Discussed with State Councilor and FM Wang Yi of #China our working together in combating #COVID19. Agreed to build further on our bilateral efforts in this domain. Exchanged views on the forthcoming #G20 Summit. Global challenges require global cooperation.” 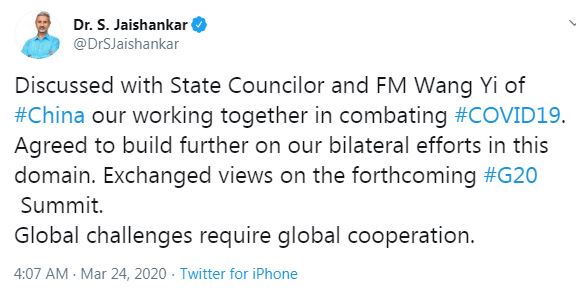